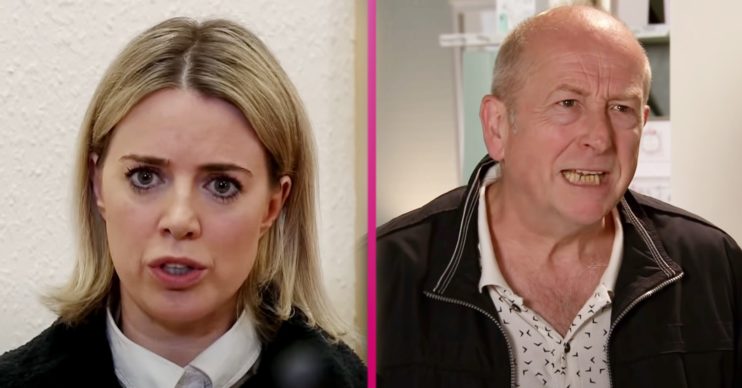 Coronation Street: Abi leaves fans in stitches as she locks Geoff in the conservatory

Abi took things into her own hands!

However Geoff recently found out about the secret ceremony and pleaded with Tim to let him attend.

Tim warned his dad to keep away from their big day, but continued to worry that he would turn up and ruin things.

Meanwhile, Sally’s best pal Abi came up with a plan to keep Geoff away from the wedding.

After using Faye’s phone to text Geoff, inviting him to the wedding, the radio DJ showed up at Sally and Tim’s house. Abi told Geoff that Faye was in the conservatory.

But as he made his way to the back room Abi confessed she was the one who text him.

She told Geoff she wasn’t going to let him ruin her friend’s wedding and locked him in the conservatory.

Fans were left in stitches by the scene and cheered on Abi for putting Geoff in his place.

Abi is fkn great. What a shame for Geoff. #Corrie pic.twitter.com/VskFqEeU47

Abi Franklin. The best friend everyone should have, and the part @sallycarman1 was born to play #Corrie pic.twitter.com/OMRdXdUHAM

"I'm not gona let you ruin this for Tim & Sal" YES Abi. She really is one helluva friend ain't she? #Corrie💍

Now Geoff knows what it's like to be locked up! Now we just need him locked up in prison! Well done, Abi! #Corrie @itvcorrie pic.twitter.com/JdaqOM7mjD

Coronation Street: What’s next for Geoff and Abi?

Spoilers reveal that a police officer turns up at Sally and Tim’s wedding reception. Will Geoff call the police on Abi?

Tim soon tells his dad he only has himself to blame for losing his family. Later Alya enjoys winding up Geoff over Sally and Tim’s wedding.

Fans know Geoff’s family recently turned their backs on him after seeing a video of him abusing his wife Yasmeen.

Geoff actor Ian Bartholomew revealed he refused to act out one scene. He refused to elaborate on what is was but hinted it went too far for him.

He told Cheshire Life: “My job is to interpret what the writers give me.

“Tony Warren (the creator of Coronation Street) said ‘Act in the way you want them to write for you’, and that is what I have tried to do with Geoff.”