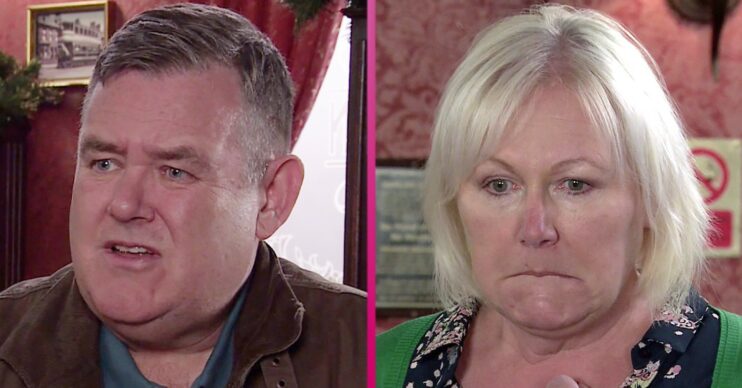 What could George be hiding?

Coronation Street fans have come up with numerous theories as to what George Shuttleworth‘s dark secret could be.

Last week George avoided his evening with Eileen to spend time with his cat, but fans are suspicious and think he could be hiding a huge secret.

Here are 5 theories on what George could be hiding in Coronation Street.

One theory fans have is George is related to Eileen’s ex-husband, killer Pat Phelan.

Pat and Eileen married in 2017, however he scammed and murdered multiple cobbles residents.

He even tried to kill Eileen before his death in May 2018.

Last year it was revealed George had Pat’s ashes at his funeral directors, which were discovered by Eileen’s son Todd.

George is the son of Archie Shuttleworth, but fans think Pat and George could secretly be related.

#corrie I've got a funny Phelan about George….

2. He’s having an affair/He’s secretly married

Another theory is he’s either having an affair or he’s secretly married.

Could that be the real reason he doesn’t want Eileen to stay over?

3. He has a dead body in his house

George is an undertaker. He took over the Shuttleworth’s funeral services after his father passed away.

But some are convinced he could have a dead body in his house.

i bet George’s big secret is that he’s a hoarder or something… maybe he has a dead body in the house? #Corrie

I think George’s secret is that he lives with his mother…..whose been dead for twenty years #Corrie pic.twitter.com/cpYgvhVUO6

4. George lives with his mother

A popular theory is that George could live with his mother.

Archie is George’s father however his mother has never been named.

Some fans have suggested that he could live with his mother and she could be unwell.

@itvcorrie @TonyMaudsley1 wonder if George secret is he is looking after his mum , who is played by #sheilareid 🙂 #coronationstreet #corrie

5. He really does have a cat

One fan has suggested that perhaps George really does have an overprotective cat and that really is the reason he doesn’t want Eileen to come over.

Maybe george really does just have a neurotic cat 😬😆 #corrie

What do you think George’s secret could be? Leave us a comment on our Facebook page @EntertainmentDailyFix and let us know what you think