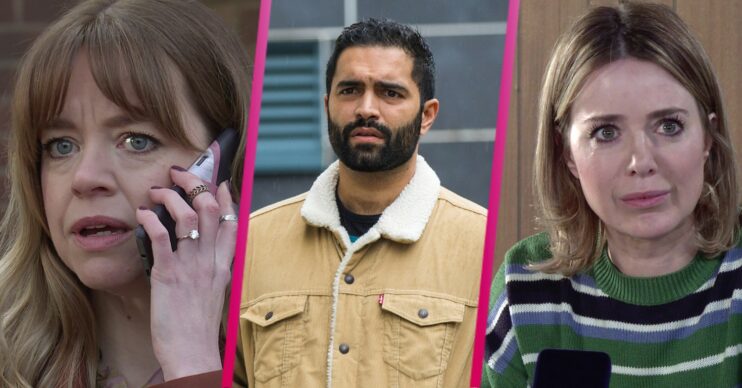 It has bene reported Imran is leaving Weatherfield

Coronation Street fans have come up with multiple theories about Imran Habeeb’s exit after it was reported actor Charlie De Melo would be leaving the show.

Currently Imran is in the middle of a huge custody battle with Abi Webster as they’re both fighting to bring home their son baby Alfie.

After finding out her fiancé Imran cheated on her with Abi, Toyah decided to give him another chance so they could get custody of Alfie and raise him together.

The couple got married this week, but will it last?

Earlier this year it was reported in The Sun that Charlie would be leaving Coronation Street after five years of playing Imran.

A source told the publication he felt it was “time was right to try new things”.

“He’s hugely talented and very ambitious and wants to see what else is out there,” a source said.

“He will always cherish his time in Weatherfield, but for now it’s goodbye.”

Now fans have come up with different theories about how Imran could leave the show.

1. Coronation Street: Toyah and Abi are setting Imran up

One theory fans have is that Toyah is working with Abi to set Imran up.

Abi is desperate to bring her son home and be a good mother, however Imran is determined Alfie should be with him and Toyah.

Some fans are convinced that Toyah and Abi are secretly working together and Toyah is helping Abi to gain custody of her son.

I think Abi and Toyah our now secretly working together against Imran. #Corrie

There’s an ulterior motive as to why Toyah married Imran and I guarantee she’s not as stupid as she seems. Abi and her have something planned and I think Toyah is team Abi now, they may be playing the long game though #corrie

Another theory is that Toyah is working against Imran, trying to get custody of Alfie for herself and plans to dump him once Alfie is in her care.

If he loses custody of his son, could he leave Weatherfield?

Is Toyah going to dump Imran after gaining custody? 🤔 #Corrie

One fan thinks that Abi will be able to prove that Imran has been trying to set her up and it could completely ruin his career and reputation.

Over the last few weeks, Imran has been convinced Abi is back on drugs and hired a man named Ben to get proof on Abi.

However this week she realised Imran hired Ben to follow her.

Now one fan believes if Abi prove can Imran was trying to set her up, she could ruin his career and future, which could lead to his exit.

4. Alfie turns out to be Kevin’s son

Another theory is that Alfie could actually be Kevin’s son.

After sleeping with Imran Abi suspected she could be pregnant, however a test came back negative.

When she went into labour in March, Abi was shocked to realise she was having a baby and that it must be Imran’s.

She told Imran she was the only person he had slept with in months. It’s also worth noting that Kevin has mentioned he’s unable to have more children.

Although it seems unlikely very Kevin is Alfie’s dad, fans are hoping there’s a chance Alfie turns out to be Kevin’s son.

Imagine if they did a DNA test and the baby turned about to Kevin’s not Imran’s #corrie pic.twitter.com/ymAOCFhO7v

Would be so funny if it turned out little Alfie was Kevin's after all. Was there a DNA test? #corrie

Some fans have predicted Imran’s exit could have something to do with Spider Nugent’s return.

Last week it was announced Spider would be returning to the cobbles 19 years after his last appearance.

He is set to star in a dramatic storyline with ex-girlfriend Toyah Battersby, but what does this mean for Imran?

Fans are predicting that Spider’s return will tie in with Imran’s exit.

I’ve read @CharlieDemelo (Imran) is leaving. Unsure how accurate that is. Spider will return and catch Toyah in his web 😃 #corrie

Spider's 🕷 back soon so that must mean Toyah kicks Imran into touch. #Corrie

What do you think of Toyah and Imran’s storyline? Leave us a comment on our Facebook page @EntertainmentDailyFix and let us know what you think.