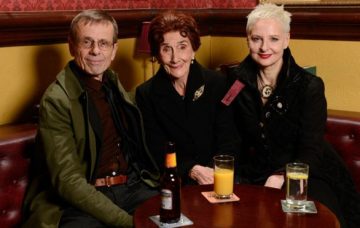 EastEnders have confirmed Walford favourites Tom Watt and Linda Davidson WILL return to the soap for one episode next year.

They will reprise their respective roles as George ‘Lofty’ Holloway and Mary the Punk after three decades away from Albert Square to pay their respects to cancer-stricken Doctor Harold Legg.

“Doctor Legg is an iconic character so it feels fitting that Lofty should return to say goodbye,” commented Tom.

He continued: “I have nothing but good memories from my time on EastEnders, so it will be lovely to set foot back in Albert Square all these years later.”

Linda also said she was “thrilled” to return as Walford’s original wild child, who turned to drugs and struggled to bring up her child in hard-hitting storylines.

“It gave me stability and a fantastic foundation from which to build an incredible life.

“I am so thrilled, and very proud to be returning to that family 35 years later. It’s going to be a blast.”

Lofty departed Walford in April 1988 after his marriage to Michelle Fowler broke down, and the former Queen Vic barman embarked on a new career as a social worker.

Linda was last seen on EastEnders just a month after Lofty’s final appearance in May 1988. She has gone on to work in digital media.

Soap bosses contacted them both about coming back to the series after Doctor Legg actor Leonard Fenton agreed to revive his character.

Executive consultant John Yorke said: “Mary and Lofty are hugely iconic characters, and a central part of the shows’ DNA.

“Though both have moved on to hugely successful careers elsewhere we are both thrilled and touched to have them back for one very special episode.”