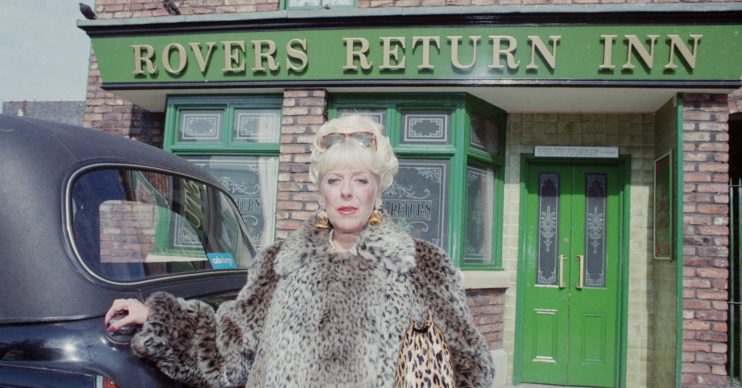 Classic Coronation Street: What’s coming up in this week’s episodes?

Steve makes a suggestion to Vicky

Are you as addicted to the vintage episodes of Coronation Street airing weekdays on ITV3 as we are? Here’s what you can look forward to this week…

What happens in this week’s Classic Coronation Street?

Nick tells Gail that he doesn’t want to fight Don.

Later the Platts try to explain to Sarah that just because Nick is changing his last name it doesn’t mean he won’t be her brother anymore.

The football team wins its first match but Curly is permanently dropped.

Meanwhile Derek snaps and tells Norris he’s had enough of him.

Raquel gets fed up when Leo postpones their date. She starts to think he’s messing her around.

Mavis hopes that the Duckworths will pull out of buying Des’s house. Maxine attempts to attract Des’s attention.

Nick goes through all the procedures and legally changes his last name to Tilsley.

When a ‘For Sale’ sign goes up outside No.9 the Wiltons are horrified. Betty is left embarrassed after a drunk Billy swears his love for her in the pub.

Meanwhile, Raquel is shocked when Leo attacks her.

After what happened in the pub, Billy apologises to Betty for embarrassing her. She later tells Gordon that she’s getting married.

Meanwhile Curly notices something isn’t right with Raquel. When he questions her, she reluctantly tells him what happened with Leo in the storeroom.

Later when Bill goes to give her a hug, Raquel acts violently. Furious about what he’s learnt, Curly has to stop himself from laying into Leo.

Norris makes an attempt to bond with Derek.

At work, Leo tells Curly if he doesn’t resign then he will fire him.

Meanwhile Don visits the Platts and tells them they will fight things out through court.

Raquel and Bet are thrilled for Betty when she tells them about her engagement.

Steve and Vicky return from their honeymoon.

Bet encounters some trouble from the brewery.

The brewery writes to Bet confirming the sell off and give her first option to buy the Rovers. Rita later considers helping Bet with the pub.

Meanwhile Raquel is fearful for her job and turns to Curly for a shoulder to cry on. Later both Bill and Raquel begin to look for new jobs.

Steve suggests to Vicky that they close down the business and start something more fun.

Classic Coronation Street airs every weekday on ITV3 at 2.50pm and 3.20pm.