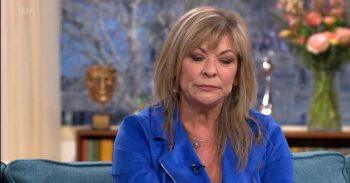 Emmerdale’s Kim Tate has to be one of soap’s most hated villains of all times.

Actress Claire King recently returned to the ITV soap after 20 years away – despite being ATTACKED for playing the baddie role in the past.

Appearing on This Morning today (Friday March, 22), the 57-year-old soap star revealed the physical abuse she has received from TV viewers who mistake fact for fiction.

Talking to Eamonn Holmes and Ruth Langsford about the iconic role, Claire admitted she didn’t have an easy time of it during her first spell in the ITV soap from 1989 until 1999.

She said: “I had people hitting me over the head with umbrellas in the old days and all sorts, because they couldn’t believe how vile Kim was.”

She went on to say: “Now it seems to be less physical and more on the keyboard.”

Claire admitted she did not read any negative comments online, and instead avoided them.

She also revealed that the backlash doesn’t bother her, as she believes it means she’s doing her job well.

Talking about her character, Claire went on to say she was “lucky to play her” and described Kim as a “hurricane”.

She added: “I think she can be a real moo most of the time, but I do actually like her. I think there is a softer side.”

With regards to future storylines, Claire teased: “She wants to find her son Jamie who was last seen hopping into the helicopter with her 20 years ago.”

She also warned: “She’s going to get revenge.”

With Kim capable of murder most horrid, the residents of Emmerdale had better watch their backs!

Viewers know that Kim has already started making life a misery for several people in the village – namely Cain Dingle and wife Moira.

But, after declaring war on Cain, fans hope Kim has met her match…

Are you enjoying Kim’s storylines? Leave us a comment on our Facebook page @EntertainmentDailyFix and let us know what you think!