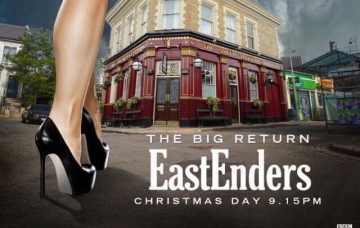 Christmas return for EastEnders legend revealed to be a hoax

The rumours from Soapland, it seems, are not true.

An image looking like a piece of TV promotional material and hinting at a return to Albert Square for a classic EastEnders character on Christmas Day has been pronounced fake.

The pic, which has been circulating on social media for a few days, apparently convinced dozens of hopeful fans a surprising comeback could feature during the BBC One soap’s festive episode.

However, an insider has reportedly confirmed the sneak peek is not authentic, frustrating those viewers who believed they’d worked out who was being teased for a Walford cameo.

Many believed the woman shown approaching The Vic in a pair of high-heeled shoes was none other than Janine Butcher.

Twisted Janine, played by Charlie Brooks, departed the show in March 2014 after being cleared of murdering her ex Michael Moon.

And there were plenty of excited tweets from show devotees looking forward to seeing the conniving hustler back in action.

“I hope it is Janine as I love @CharlieBrooks0 as a actress she is missed greatly,” said one fan.

Another delighted viewer tweeted: “OIIII NAHHHHH I SWEAR ON MY LIFE IF IT’S JANINE RETURNING TO EASTENDERS I AM GOING TO HAVE A HEART ATTACK.”

However, an EastEnders spokesperson has reportedly told The Sun the viral image is not genuine.

Janine was first whispered about as a potential Christmas surprise back in October when Dean Gaffney hinted a big name could be set to turn up for the festive episode.

“I think they’re iconic with EastEnders,” he said at the time.

“There’s certain people that come back to a show, they might not add to it, but this person definitely adds to it!”

And earlier this year, 37-year-old former I’m A Celebrity winner Charlie said she would never rule out a comeback for soap villainess Janine.

“I loved playing Janine. I always think about what she could be up to, what might she be doing,” she said in May.

“It’s a bit like going home – the idea of going back there but there is no talks of it at the moment.”

Maybe next Christmas then?