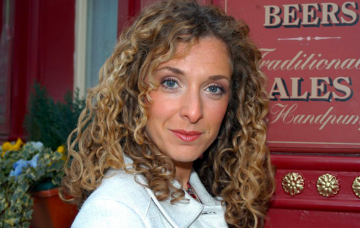 It’s been 13 years since EastEnders viewers last saw Chrissie Watts – an unlucky number for some, but could her luck change and see her released from prison and back in Albert Square?

In 2005, Dirty Den’s second wife Chrissie was charged with his murder and pleaded guilty to the crime. And she’s been locked up ever since.

But actress Tracy Ann Oberman has hinted that her return isn’t out of the question.

Appearing on Good Morning Britain today (Wednesday 2 January), she told interviewers Kate Garraway and Charlotte Hawkins that she would be open to reprising her character.

She said: “You never say never. When that phone call comes… She’s done [more time in prison] than most actual murderers!”

Talking of the fans’ fondness for the character and demands for her return, she went on to say: “I think it’s humbling.

“EastEnders is an incredible experience and to be part of this iconic show, and then also to have been part of murdering Dirty Den was very exciting. So I’ll take it as a compliment.”

She continued: “She made an impact with people, that character. It was beautifully written. So I do think it’s great to have had a character who made that much of an impact.”

The actress, previously best known for comedy, appeared in EastEnders between April 2004 and December 2005.

In February 2005, 14 million viewers tuned in to see Chrissie kill Den by hitting him over the head with an iron doorstop (plenty had tried before).

However, Chrissie was eventually caught and arrested for the crime and was last seen in prison, preparing to plead guilty.

Viewers know for sure that Lola Pearce will be returning with her daughter Lexi, but Kate teased that at least three fan favourites would be coming back.

Talking about upcoming storylines in a Q&A posted to the show’s official Twitter page, she said: “There is one coming back in spring that I am really excited about.

“It’s going to be for a fairly short stint but I think it’s going to have a really big impact.”

Could killer Chrissie be one of them?

Who would you most like to see return to EastEnders? Leave us a comment on our Facebook page @EntertainmentDailyFix and let us know what you think!