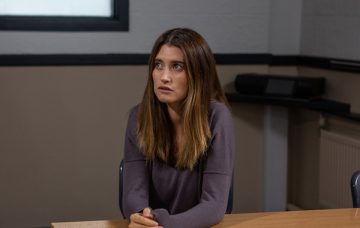 It was always meant to be more about him than Debbie

So Debbie Dingle has confessed to police about her involvement in Ross Barton’s acid attack.

And actress Charley Webb, who plays her, thinks the mechanic would struggle behind bars as she’ll find it tough being apart from her kids.

She said: “She’d go to prison for a long time and her kids would be outside so not great, and it would be for something that wasn’t really her fault so it would be a bigger kick in the teeth.

“So she would not cope well.”

Charley hopes her character doesn’t get punished too harshly for the attack – which saw Ross (Michael Parr) mistaken for the intended target, Joe Tate (Ned Porteous) – as she didn’t ask Simon McManus (Liam Ainsworth) to use acid.

She told Metro.co.uk: “That story has been a bit muddled and confused, she never ordered the acid, the acid was just something that that guy did even though she did just want Joe to get beaten up for what he’d done.

Now that Simon has been arrested and Debbie has confessed, Charley hopes the storyline can be “put to bed” for her alter ego.

She said: “I am glad that it’s out because I would quite like to put that story to bed now for that character because it should never really have been about Debbie.

“It should’ve been what happened to Ross, and she was just unfortunately part of that, she didn’t actually order the acid so I do think it’s quite a difficult one.

Do you think Debbie should do a stretch inside?  Leave us a comment on our Facebook page @EntertainmentDailyFix and let us know what you think!