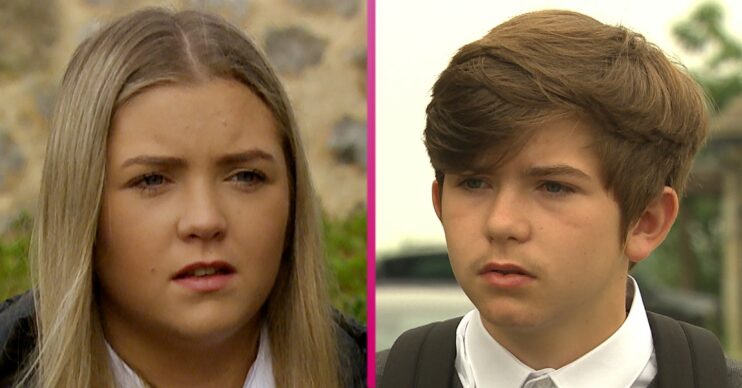 Cathy and Heath in Emmerdale: Who plays them? Has Heath been recast?

They've had a troubled upbringing so it's no wonder they're causing problems!

Cathy and Heath in Emmerdale are the teenage twin children of Bob Hope and his late wife, Viv. They’re uncle and aunt to April Windsor, who’s just two years younger.

Recently Cathy was caught bullying April which caused a huge divide between the family.

Now Cathy is trying to help Amelia as she’s been growing increasingly concerned about her friend.

But who are Cathy and Heath?

Who plays Cathy and Heath in Emmerdale? Has Heath been recast?

The village siblings are played by real-life twins Gabrielle and Sebastian Dowling.

They’ve played Cathy and Heath since they were tiny babies back in 2007, and are still portraying the Hope siblings.

Their mum, Louise, signed them up for the show when she was pregnant. As a former professional dancer, she knew what was involved in the showbiz life, and thought it would be a great opportunity for her tots.

But as the babies weren’t on permanent contract at first, they had no idea that 15 years later the kids would still be starring in the show!

During lockdown and the coronavirus pandemic, some of Emmerdale’s younger actors stopped filming for a while.

And when Cathy and Heath returned to our screens, viewers were astonished to see how grown up they looked!

Cathy and Heath in Emmerdale and their dramatic arrival

Bob and Viv were married with several children between them when Viv found out she was expecting.

They’d wanted a baby so Viv was overjoyed. But Bob wasn’t thrilled at the idea of adding to his brood, especially as he was still grieving for his daughter Dawn Woods, who’d been killed in a tragic accident.

He wanted Viv to terminate her pregnancy but changed his mind and when she went to have the abortion, he stopped her.

Cathy and Heath were born in typical soapy dramatic fashion, when Viv unexpectedly went into labour on the moors.

Luckily, Paddy Kirk was on hand to deliver the babies – even though he’s more used to delivering lambs and calves!

They were named Catherine and Heathcliffe after the heroine and hero of Wuthering Heights and are now known as Cathy and Heath.

What happened to Cathy and Heath’s mum?

Viv was devoted to her children, but when they were still very small, she got involved with a dodgy charity scheme and ended up in prison for fraud – even though she’d been conned herself.

When she was released, she was heartbroken when the twins didn’t recognise her at first.

In 2011, Viv was inside the post office in the village with Cathy and Heath, when it was set on fire by Emmerdale villain Nick Henshall.

Bob went inside the burning building and managed to rescue the children.

Brave Terry Woods – who’d been married to the twins’ big sister Dawn – went into the flames to try to get Viv, but both he and Viv died.

The twins and Brenda

When Bob got together with Brenda Walker, she took them under her wing and they grew very close to her.

But when Bob and Brenda got married – despite Bob cheating – and then quickly broke up, the twins were upset.

They began causing some trouble and even set fire to their dad’s belongings. But they calmed down when Bob allowed them to move back in with Brenda.

Did Cathy and Heath bully April?

Cathy and Heath were trying to support her.

However April was horrified when she found out the person who started the trolling was Cathy.

Heath had no involvement and was disgusted by his sister’s actions.

Recently Cathy has become concerned about her friend Amelia, who has been doing lots of workouts and taking weight-loss syrup.

Although Amelia lied to her saying she’s stopped taking the syrup, Cathy’s concerns have increased since Amelia passed out.