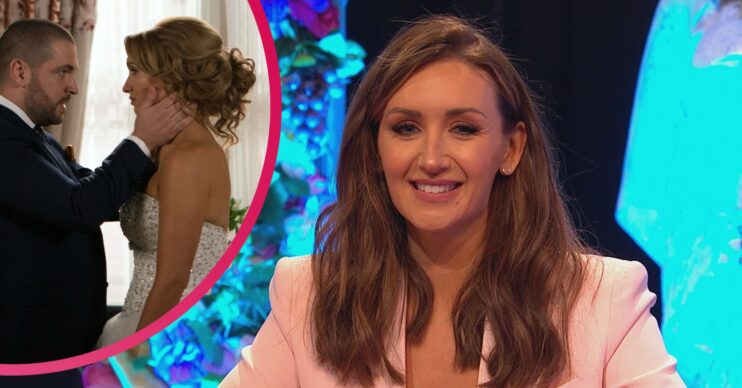 Coronation Street star Catherine Tyldesley: Who did she play and will she ever return?

She also appeared in Strictly Come Dancing in 2019, partnered with Johannes Radebe.

But it was Corrie that made her name when she took on the role of Eva Price. So what’s her story?

How old is Catherine Tyldesley?

Catherine was born in September 1983, making her 38 years old.

She is from Manchester and studied at Birmingham School of Acting.

Her telly career began with a small part in Holby City, back in 2006.

Who did Catherine play in Emmerdale?

In 2010, Catherine landed the role of Abi Peterson in Emmerdale.

Abi was a prison guard who had an affair with Ryan Lamb when he was on remand, charged with killing his dad, Mark Wylde.

Why do people ask if Catherine was in Hollyoaks?

Catherine has never been in Hollyoaks but it’s possible her role in Emmerdale is why people ask that question.

Who did Catherine play in Corrie?

Eva was the daughter of Stella Price, and the half-sister of Leanne Battersby. She was nicknamed Eva the diva thanks to her glamorous lifestyle and fondness for drama, and she was in the thick of the action during her seven years on the Street.

But there was more to Eva than her good looks and diva behaviour. When she found a girl called Marta hiding in the factory, she set about exposing a modern day slavery ring with the help of vicar Billy Mayhew.

It was her romance with Aidan Connor, though, that caused the most drama.

Aidan and Eva seemed to be in love – at least that’s what Eva thought. But Aidan started an affair with Maria Connor.

Eva found out when a message from Maria to Aidan flashed up on the television which was connected to Aidan’s phone. She didn’t confront her man, though. Instead she set about getting revenge. She pretended to be pregnant, and when Aidan proposed, she made Maria her head bridesmaid and sent her on all sorts of ridiculous errands during the wedding planning.

She even teamed up with Adam Barlow and tried to ruin Aidan financially.

At the wedding, Maria and Eva ended up fighting in a fountain in some classic Corrie scenes.

When did Eva leave Corrie and could she return?

Later, Eva found out she was in fact pregnant with Aidan’s baby. She kept her pregnancy secret and hatched a plan with Toyah Battersby for her to adopt the tot as her surrogate had recently miscarried.

But after Aidan took his own life, things got messy. Eva took baby Susie back and moved to France with her mum.

Though Eva’s still mentioned occasionally, there are no plans for her to return.

Who is Catherine married to?

Catherine is married to Tom Pitfield, a photographer and personal trainer. The pair have been together since 2014 and have a son called Alfie, who is six years old.

Catherine took part in All-Star Musicals on ITV at Christmas and won after wowing audiences with her amazing singing voice.

But since then Catherine’s been taking things easy because she’s pregnant with her second baby – a little girl – who’s due in the spring.

How did Catherine Tyldesley lose weight?

When she was younger, Catherine’s lifestyle and erratic working hours meant she piled on weight and was struggling with her health.

She embarked on a strict fitness and healthy eating regime and shed the weight. Now she’s passionate about health and says she feels better when she fuels her body with good food.

Is she related to Clive Tyldesley?

Catherine is not related to football commentator Clive Tyldesley.