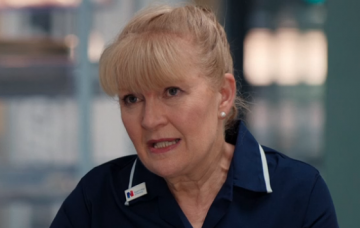 The show has consulted with charities on the hard-hitting storyline

Casualty’s Lisa ‘Duffy’ Fairhead will be diagnosed with early-onset dementia on this Saturday’s (19.01.19) episode.

The long-serving nurse character – portrayed by Cathy Shipton – will be told the devastating news, and show bosses have praised “fantastic charities”, such as Dementia UK, for helping the programme to act out such hard-hitting plots realistically.

Producer   Simon Harper said: “We are mindful of telling them authentically and sensitively, which is why we are always so grateful to fantastic charities like Dementia UK, who give us invaluable advice.”

Simon also heaped praise on Cathy for her stellar performance as Duffy.

He is quoted by The Sun’s Bizarre TV column as saying: “Depicting this cruel disease will help raise awareness, and Cathy is knocking it out of the park with her heart-breaking performance.”

Read More: Viewers call for the axe to fall on EastEnders Mick Carter

One bright light for Duffy is that she can keep working for now because the disease is in the early stages.

This weekend’s Casualty looks to be eventful for another reason as Chelsea Halfpenny will bow out of her role as Alicia Munroe in the medical drama after four years on the BBC One show.

The 27-year-old actress – whose auntie is former Coronation Street and EastEnders actress Jill Halfpenny – recently admitted her decision to leave the fictional hospital is so she can progress her career, a similar reason to why she quit Emmerdale in 2013.

Chelsea – who played Amy Wyatt in the ITV soap – added: “I’ve been there for a few years and I just felt like it was time for me to move on and progress.

“I had a really good time there and I wanted to leave on a high.”