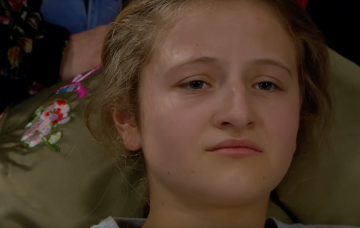 Some members of the Emmerdale cast have posed for a couple of sweet photos together.

Daisy captioned the post: “I love my roomies + @mimislinger.”

The actresses have been working hard on the soap.

A couple of weeks ago, Graham Foster was killed off in a whodunit storyline.

At the end of the week, it was revealed Graham was killed by Rhona Goskirk’s rapist ex-husband.

Andrea was one of the many villagers who the businessman made an enemy of.

On Christmas Day, Graham revealed to Andrea’s husband Jamie that he had slept with Andrea nine months before her daughter Millie was born.

Although a DNA test proved that Jamie is Millie’s father, he ended his relationship with Andrea over the lies, leaving her gutted.

Despite Pierce killing Graham, the police believe Marlon Dingle was responsible for the murder as he arranged to meet Graham in the woods, where he was killed.

After the police found the murder weapon hidden in Marlon’s kitchen, he was charged but pleaded not guilty to the crime.

He wasn’t granted bail and has to remain in prison until his trial in June.

In the meantime, his cousin Mandy has been working on a ‘Free Marlon’ campaign, along with his daughter April, in order to get him out of prison.

But will they be able to prove Marlon’s innocence?