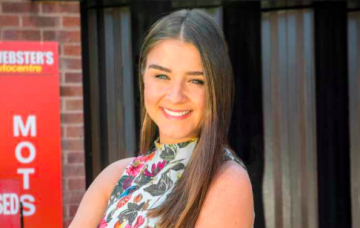 Brooke Vincent will make a comeback as Sophie Webster, if Coronation Street bosses get their way.

The powers that be are said to be desperate for the new mum to return after her contract expires while she’s on maternity leave.

Read more: Coronation Street viewers want Yasmeen to kill Geoff and feed him to the chickens

According to The Sun Online, soap bosses have given new mum Brooke “as long as she needs” to decide whether or not she returns to the famous cobbles.

The show executives are desperate to keep her and will offer her more money when the time is right.

Sources say the soap will offer her an “improved deal” if she decides to return to her role as Kevin and Sally’s daughter.

One source said: “The show executives are desperate to keep her and will offer her more money when the time is right.”

They added: “There is no rush but they also don’t want to lose another big name after so many high profile departures in recent times. She has been told she can have as long as she needs away from Corrie.”

In the past six months, cast members including Kym Marsh, Tristan Gemmill and Katie McGlynn have all walked away from Weatherfield.

Brooke, 27, bowed out of the show in the summer as she prepared for the birth of her first child with footballer boyfriend Kean Bryan.

She gave birth in October and named her son Mexx.

Her 12 month running contract for the show will expire in May.

A spokesman for the ITV soap confirmed the news to The Sun Online, saying: “There was never a fixed return date for Brooke, and there is no pressure for her to return within any particular time frame.

“The door has been left open for her at any point in the future, whenever that might be.”

Brooke first joined the soap in 2004 – the third person to play Sophie.

When she left the soap last year to become a mum, she told fans: “I can’t believe 15 years ago I came onto the street to play Sophie Webster and today I left to play my biggest role yet – Mummy. My amazing family at Coronation Street I am going to miss you all so much.

“Thank you for always looking after me, for keeping me on the straight and narrow and for letting me get away with murder over the years.”

On the show, her character is travelling with Kate Connor.

Do you care whether Sophie returns or not? Leave us a comment on our Facebook page @EntertainmentDailyFix and let us know what you think!