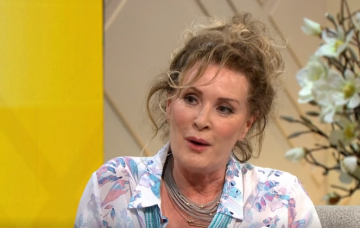 Her character is currently off screen!

Coronation Street’s Beverley Callard has announced she will be taking a short break from her alter ego Liz McDonald in order to star in a new play.

The actress who has played barmaid Liz McDonald for nearly 30 years is currently off screen at the moment as she has been narrating The Rocky Horror Show but it looks like she will be doing more stage work.

Appearing on Lorraine this morning (22.02.18) Beverley revealed she will be starring in a brand new play called called The Thunder Girls.

Read More: Coronation Street SPOILER: Amy’s lies catch up with her as she refuses baby scan

The play follows a 1980s girl band who are reunited after greed, envy and ego destroyed the group and their friendships. Beverley will be playing band member Roxanne

It will have an all female cast, production team and director.

Beverley told host Christine Lampard, who is filling in for Lorraine: “As an actor, you get offered scripts all the time but because I’m contracted to Coronation Street which I love, it’s very difficult.

“Even if you love a script it’s hard to say yes, everything has got to be juggled. But this script came to me and I just said to my producer at Coronation Street ‘I can’t say no to this. Please let me do this.'”

She then went on to say: “[My husband] John read it first because he was home before me and when I got home he gave me a cup of tea and the script and he said, ‘Beverley read that,’ and I just sat there, read it from begging to end and said ‘I’ve got to do it. I’ve got to do it.’

“It’s about a girl band, or they were a girl band. Very very successful, but this play has been written for twenty years. It’s not copying any other band and normally when you see a reunion, there’s usually a few arguments.”

Read More: EastEnders and Coronation Street BOTH moved about in tonight’s TV schedule

The play will preview for one week at The Lowry Theatre in Salford from September 24-28th.

Will you be going to see The Thunder Girls? Leave us a comment on our Facebook page @EntertainmentDailyFix and let us know what you think!