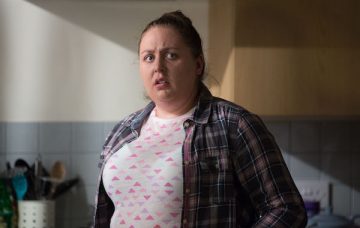 The actress went to Copenhagen

Clair Norris, who plays Bernadette Taylor in EastEnders, looks stunning in pictures from her winter holiday to Copenhagen with her boyfriend Lewis.

One fan commented: “Hope you had an amazing time.”

This isn’t Clair and Lewis’s first holiday together.

Last year, the actress shared snaps from their summer holiday in Limassol, Cyprus.

Last month, Clair looked gorgeous as she walked the red carpet at the NTAs with Lorraine Stanley, who plays Bernie’s mum Karen Taylor in the BBC soap.

Clair joined EastEnders back in 2017 as part of the Taylor and Baker family.

During her time on the soap, her alter ego has been through a lot.

Not long after their arrival on Albert Square, Bernie discovered she was pregnant, but sadly she ended up giving birth at 18 weeks and her daughter died.

Later at a memorial, Bernie and the baby’s father Callum Edwards decided to name their daughter Belle.

In 2018, the schoolgirl revealed to her mum that she’s a lesbian.

Viewers saw her develop a crush on her best friend Tiffany Butcher, however Tiffany fell for Bernie’s brother Keegan.

Eventually Keegan and Tiffany got married and Bernie was supportive of them both.

Recently Bernie was left worried when she hadn’t heard from her brother Keanu in weeks and was starting to wonder why Karen wasn’t more worried about her missing son.

Karen was forced to tell her that Keanu is alive and had to flee Walford as the Mitchells want him dead.

Keanu had an affair with Phil Mitchell’s wife Sharon, resulting in her getting pregnant.

To add insult to injury, Keanu was engaged to Phil’s daughter Louise, who he has a daughter named Peggy with.

After hearing about Keanu from Karen, she admitted she stole Keanu’s number from her phone.

She contacted her brother telling him it’s safe to return as Phil and Louise have left Walford.

But Keanu’s return spelt danger for Callum Highway, who is dating Ben Mitchell, as Keanu is holding him hostage in return for £100K.

With the show’s 35th anniversary this week, it looks like there will be a showdown between Keanu and Phil.

But will everyone make it out alive?