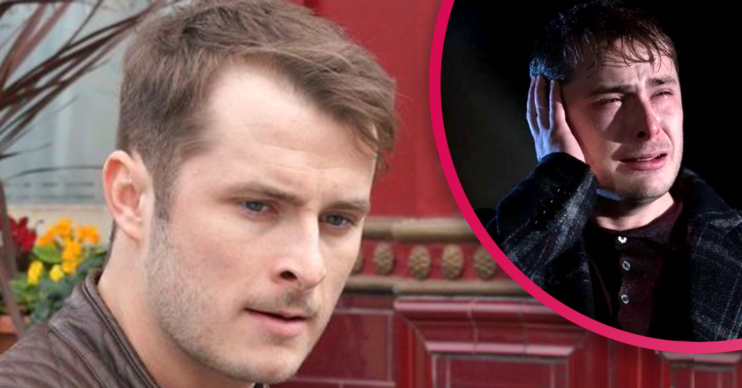 Does Ben’s hearing come back in EastEnders? Max Bowden reveals what’s in store

The Walford bad boy has been struggling with his hearing ever since the Thames boat tragedy.

But his problems were made even worse last night (June 1) while trying to help out his dad Phil with one of his dodgy deals.

Does Ben’s hearing come back in EastEnders?

Does Ben’s hearing come back in EastEnders?

Ben (Max Bowden) has now lost all hearing in his left ear after Danny deliberately fired a gun next to it.

Pulling out the firearm, he asked “is this your good ear is it” before viciously pulling the trigger.

Visibly in pain, Ben fell to the ground before realising he is now completely deaf.

According to the NHS, sudden hearing loss can be caused by damage from a very loud noise – also known as perforated eardrum.

This can get better within a few weeks.

However, given Ben’s existing problems, his hearing may never come back.

EastEnders have been working with the National Deaf Children’s Society and audiology experts to ensure the storyline is portrayed as accurately as possible.

What’s next for Ben?

Ben will regret helping his dad.

During an interview with Digital Spy, Max Bowden said: “There probably was regret in terms of things not going the way he planned but there was a real feeling there.

“In all honesty, I think he probably knows it was a dumb move.”

However, that doesn’t mean Ben will become a changed man.

Max added: “Everyone would be bored if it was plain-sailing every day. It’s about finding a balance. Ben has that embedded in his nature and it’s important to not forget that.”

Callum has befriended the Walford newbie, who has been deaf since birth, and asked her to meet with Ben.

Frankie and Ben do eventually strike up a friendship and she is currently expected to appear in several upcoming episodes.

But if she proves popular with fans, could she be hanging around in Albert Square for longer?

Commenting on joining The BBC soap, Rose said: “I am so excited to be joining the cast of EastEnders and I am equally proud to be one of the first deaf actresses to be part of this iconic soap.

“I can’t wait for everyone to meet Frankie!”

What has the National Deaf Children’s Society said?

Vicki, who works for the National Deaf Children’s Society, described the EastEnders team as “so dedicated to making sure they got this right.”

She said: “[It] will give viewers a glimpse into the challenges many deaf people in the UK come up against each and every day, with brilliant technical skill to make viewers feel some sense of what Ben Mitchell is experiencing.”

The audiology specialist also revealed that hearing loss can bring an overwhelming sense of isolation and loneliness.

“So much of this stems from the challenge of communicating, and people not making those little adjustments to include a deaf person in everyday conversation,” she explained.

“From speaking clearly, not covering your mouth, to writing something down or using gestures when you speak – a little bit of deaf awareness can make a huge impact.”

What do you think the future holds for Ben in EastEnders?