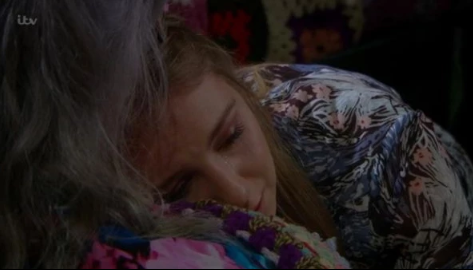 She had viewers in tears with her

Viewers of Emmerdale knew they were going to be in for an emotional ride last night.

He and the family knew that she was living on borrowed time due to a heart condition, but they weren’t expecting her to go just yet.

As Friday’s episode began, daughter Belle came home from the reception to discover her father weeping.

She was inconsolable to discover her mum was gone and clung to her body, even when the doctor – Manpreet – arrived to confirm the death.

Gradually the other members of the Dingle clan learned the awful truth and gathered as Lisa’s body was eventually taken away.

While most viewers were blown away by the tender scenes, some couldn’t help but pick holes.

Namely, the fact they could still see Lisa breathing…

One viewer tweeted: “Has no one noticed she’s been breathing in the last 19 minutes?”

“It’s a miracle – Lisa Dingle is dead but she is still breathing,” observed a fourth.

Err… shall we break it to them gently? Lisa’s appeared in most of last night’s episode… were they expecting actress Jane Cox not to take a single breath during her long scenes?

Aside from the nit-pickers, many fans were full of praise for the acting, particularly that of Eden Taylor-Draper, who plays Belle.

Belle Dingle in #emmerdale always breaks my heart.
Such a good actress .
The way she just held Lisa and the expression on her face was so heart wrenching xx ❤❤❤

Did I cry when I saw Lisa was dead? No, did I cry when Zak cried? No, but when Belle started bawling I lost it #emmerdale

Read more: Emmerdale viewers fear Belle will be destroyed by her mum’s death

Leave us a comment on our Facebook page @EntertainmentDailyFix and let us know what you think of the episode.