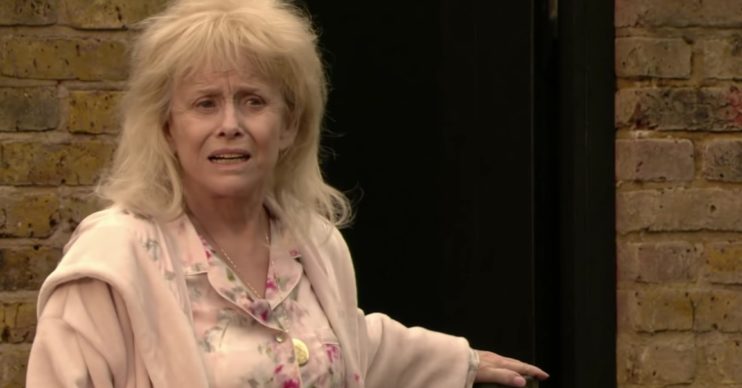 Barbara Windsor death: What was her last scene in EastEnders? When did she join soap?

And when did she join the cast?

Here’s everything you need to know about Barbara Windsor’s time in Walford playing such an iconic character.

Read more: Barbara Windsor death: How do you die from Alzheimer’s?

What was Barbara Windsor’s last scene in EastEnders?

Peggy Mitchell’s final appearance was broadcast on May 17 2016.

The popular character died after a battle with breast cancer.

In sad news, Peggy is told that her cancer has spread to her brain and it is terminal.

She decides not to have any more chemotherapy.

The Queen Vic legend decides she wants to be remembered as a strong woman, not as an invalid.

She takes a lethal overdose of pills that she hid from her sons and dies in her sleep that night.

Nearly half of all British TV viewers tuned into the moment Peggy took her own life.

The episode attracted a peak of 8 million viewers, and a 41% share of the national audience.

Why did Barbara leave EastEnders?

Barbara announced she was quitting the soap in October 2009.

She said she wanted to spend more time with her third husband Scott Mitchell.

She said: “I’ll be so sad to leave Peggy behind. She’s such a wonderful character to play.”

She did not, at that time, reveal that she had begun to have trouble learning her lines.

After a series of mental agility tests and a brain scan, she was diagnosed with Alzheimer’s in 2014.

EastEnders were reluctant to kill off such an iconic character but she rang the producers to insist.

When did she join the cast?

Peggy was initially played by Jo Warne in 1991, for 10 episodes.

The character was reintroduced in 1994, with Barbara Windsor in the role.

Her first episode broadcast on November 7 1994.

The family remain one of the most popular additions to Albert Square.

In 1995, Peggy Mitchell became the landlady of The Queen Vic.

Inside Soap named Peggy the UK’s top soap matriarch in 2009.

She based the character of Peggy on Violet Kray, the matriarch of the gang family she had known so well in her youth.

What else did Barbara star in?

Before joining EastEnders, Babs was best known for her comedic roles in the Carry On films.

She starred in Carry On Spying in 1964 as Daphne Honeybutt.

In 1967, she portrayed Nurse Sandra May in Carry On Doctor.

She went on to star in Carry On Camping, Carry On Christmas and Carry On Matron, among many others.

She also played Saucy Nancy in the original Worzel Gummidge, opposite Jon Pertwee.

Her first ever acting role was uncredited as a naughty schoolgirl – naturally! – in the 1954 film The Belles of St Trinian’s.