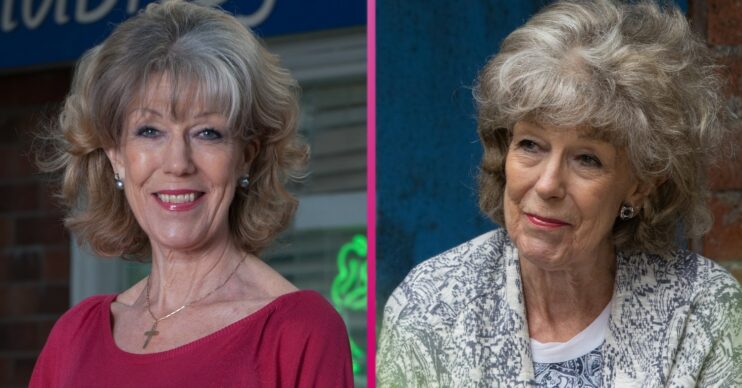 What’s wrong with Audrey Roberts in Coronation Street? Is she going to die?

She's queen of the cobbles, but is she hiding a problem?

Audrey Roberts in Coronation Street is the queen of the cobbles!

But the matriarch of the Tilsley/Platt clan is struggling big time right now.

As ageing takes it’s toll, Audrey has been lashing out at everyone around her and now she’s had a terrible accident putting her life on the line.

Audrey first appeared at daughter Gail Potter‘s party, celebrating her engagement to Brian Tilsley, back in 1979.

She and Gail had a fractious relationship, thanks to Audrey being a bit of an absent mother over the years!

Audrey popped in and out of Corrie for a few years, before she caught the eye of local dignitary Alf Roberts.

The pair tied the knot and Audrey became a full-time part of the Street in 1985.

Audrey is a hairdresser by trade and has owned both Audrey’s Salon and Trim Up North barbers shop.

How old is Audrey?

She is currently 81 and will turn 82 years old next month.

In 1996, Audrey got a shock when the son she’d had at aged 17 and given up for adoption, appeared in the Street.

He returned to his home in Canada, but he’s often mentioned and the family visit him. Audrey’s grandson Nick Tilsley even lived with his uncle Stephen for a while.

And it was Stephen who gave Sarah a job in Milan, when he was expanding his business empire into Europe.

Stephen is set to return on Friday June 23 to rescue his mum.

What happened to Audrey’s husband Alf?

Audrey was devastated when her Alfie died on Nick’s 18th birthday.

She threw herself into work and stood for the local council just as Alf had done.

Audrey and best friend Alma got into all sorts of trouble until Alma also passed away in 2001.

It was Audrey who first suspected that her son-in-law, Richard Hillman, might not be the fine upstanding man he was pretending to be.

Audrey challenged Richard at the funeral of his murder victim Maxine Peacock – much to the shock of the mourners. But Ken Barlow believed her – though no one else did until eventually Archie Shuttleworth and Norris Cole came to suspect Richard too.

Audrey’s conviction that Richard was a killer drove a wedge between her and Gail, but after the truth was revealed, they reconciled.

When Audrey met suave Lewis Archer she was smitten, even when she discovered he was an escort.

Lewis claimed he loved her too and the pair planned to buy a hotel in Greece together. But Lewis wasn’t honest and instead stole money from the bookies and ran off.

When he reappeared in Weatherfield, Audrey fell for his charms once more. He convinced her he was a changed man and she went along with a plan hatched by Gail to test his feelings.

When Lewis found out Audrey was in on it all, he was shocked and hurt. And when Gail developed feelings for him, he saw a chance for revenge.

He conned Gail out of the contents of her bank account and left a video message explaining what he’d done, before fleeing.

No one trusted Lewis to resist temptation – especially as he’d returned with another scam. But he insisted he was honest.

When Lewis died of a heart attack, Audrey was heartbroken. And when she discovered the £80k was missing, she thought everyone was right to mistrust Lewis.

But actually Nick had stolen the money – and Lewis had been telling the truth.

Aud’s been head of the Platt family for so long, we can’t imagine Coronation Street without her.

But recently, Audrey’s eyesight has been declining, and her love of a cheeky drink has caused some concern.

She batted away all attempts to help, but eventually, after several car accidents got her eyes checked. Audrey was diagnosed with cataracts and has had an operation to have them removed.

But more serious is her drinking.

She is knocking back G&T after G&T followed by several glasses of wine. She was even banging on the door of the Rovers at opening time demanding a drink on Wednesday June 23.

And then she got so sloshed she sacked everyone at the barbers and spent most of her day flirting with Ryan Connor.

No one could get through to her and she insisted she did not have a drinking problem.

As she banished everyone and insisted she wanted to be left alone, Audrey took a fall and was trapped under a motorbike.

She called out for help, but no one could hear her…

Does Audrey die in Coronation Street?

Audrey will survive this incident – but will she admit she needs help?

On Friday (June 24) Audrey will be discovered by Brian and Elaine, having spent the night trapped at the barbers.

At that moment, Stephen emerges from a taxi. He breaks down the door and is shocked to find Audrey barely conscious.

The Platts, meanwhile, have summoned resident alcoholic Peter Barlow to help them understand how to help Audrey.

The meeting is interrupted by Brian who tells them what’s happened.

Stephen is furious with the family for not noticing Audrey was missing all night.

Gail is terrified her mum is going to die.

Audrey is taken to hospital where she makes a recovery.

Stephen manages to calm things down and broker peace between Gail and Audrey, but can he help his mum get better?

As Gail and her brother try to work together to help Audrey, will she admit she has a problem and get help?

And is the drinking all there is too it? Or is it loneliness? Could she be depressed? Just what has caused her love for a cheeky tipple to turn into this huge problem?

Audrey is played by accomplished actress Sue Nicholls. Sue was born on November 23 1943, making her 78 – making her three years younger than Audrey.

Sue had already been in Crossroads and had a hit single when she landed the role of Audrey.

And during her time on Corrie, Sue also had roles in Rentaghost, The Fall and Rise of Reginald Perrin, and The Professionals.

She was married to Mark Eden, who played Alan Bradley, from 1993 until he died last year.

In 2011, a senior nurse called Anna Bianconi-Moore who worked in the dermatology department at Addenbroke’s Hospital, was watching Corrie when she noticed a mole on Sue’s shoulder. She contacted the show and advised her to get it checked.

The in-house doctor at ITV referred Sue to a specialist and she was diagnosed with malignant melanoma. Luckily, after treatment and the removal of her mole, Sue recovered.