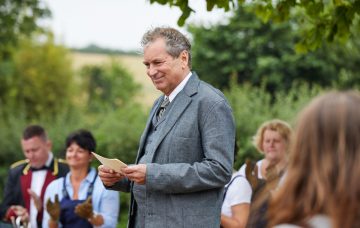 The 65-year-old star, who played vicar Ashley Thomas for over two decades, will appear in spin-off series Emmerdale 1918 this Thursday.

The documentary series has featured dramatic World War One stories of villagers in rural Yorkshire presented by the cast of the soap.

And in the final episode of the six-part run, John will make his unlikely return and deliver a poignant speech as he and several of his soap pals host a climactic Armistice commemoration.

Appearing on Lorraine this morning, John told stand in host Carol Vorderman his role was inspired by Reverend Richard Whincup, who was minister of the parish of Esholt – the village where Emmerdale is set – and served on the front lines.

“This is real life. We’re exploring the characters we played, what they would have been in real life in 1918 or throughout the first World War,” he explained.

John continued: “What struck me more than anything else is the responsibility that man had to write home to the bereaved families.

“To find the right words to honour their son’s death and give their condolences. I found that very moving to see those messages.”

Fans hoping for an extended improbable comeback on the soap proper should not get their hopes up, however.

Apart from the fact Ashley passed away in April 2017 after a heartbreaking fight with dementia – not that apparent death has ever been a barrier to a soap character’s return – John admitted he has made a concerted effort to leave the character behind him.

Furthermore, he now doesn’t even watch the soap.

“It’s not because I don’t think it’s good, I think it’s absolutely terrific,” he reasoned.

John continued: “I had to shut the door on that put it behind me and move on to the next thing.

“I had to make it as abrupt as possible for my own peace of mind and to get it into my head that it was a new start to my career.”