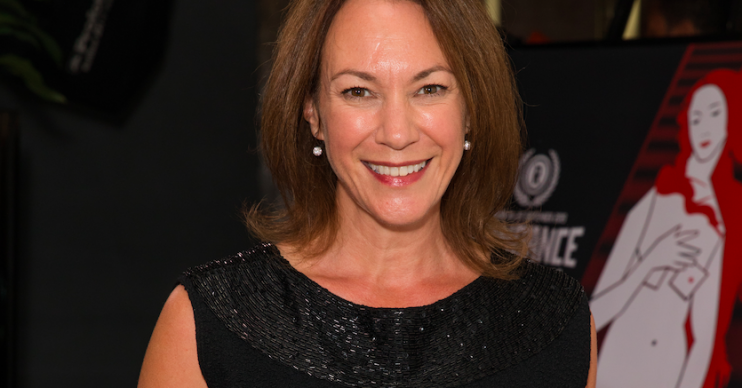 Tanya Franks sent EastEnders fans into full-on speculation mode when she appeared to show evidence of yet another impending death in Walford.

The actress, 52, shared a behind-the-scenes photo with her 1,430 Twitter followers – but perhaps accidentally showed too much.

On Thursday (February 27), Tanya – who plays troubled Rainie Cross in the BBC soap – posted a beautiful picture of a rainbow over the fictional town of Walford.

Could somebody else be getting killed off this spring?

Alongside the snap, she wrote: “When #Nature meets #EastEnders. Couldn’t believe my eyes – look what I caught over the Queen Vic! #@bbceastenders #rainbow #beautiful #HappyThursday.”

But eagle-eyed fans were quick to spot something slightly more sinister in the background, when they noticed a bunch of flowers attached to the railings, alongside what looks like a West Ham scarf.

Could the flowers and scarf – clearly a tribute or memorial of some kind – mean another Walford resident is set to die?

Already this year, Leo King was stabbed to death by Whitney Dean, Sharon’s son Dennis Rickman Jr drowned in the tragic Thames boat accident, and Daniel Cook is set to pass away any day now.

who else is a west ham fan on the square? i can’t see billy dying but it looks like someone does #eastenders

Right what are these flowers all about!? And a West Ham scarf?? EastEnders films about 6 to 8 weeks in advance. Unless its a memorial for Denny or Daniel, could somebody else be getting killed off this spring? #EastEnders https://t.co/Fy9qjsqpQc

One fan pondered: “This is wonderful. However who are the flowers for? Have we lost someone else?”

Another added: “Is Billy going to die?”

A third wrote: “That’s beautiful, but those flowers have me wondering…”

“Who else is a West Ham fan on the Square? I can’t see Billy dying but it looks like someone does,” asked another.

One more said: “Right what are these flowers all about!? And a West Ham scarf?? EastEnders films about six to eight weeks in advance. Unless it’s a memorial for Denny or Daniel, could somebody else be getting killed off this spring? #EastEnders.”

One fan refused to see anything sinister, however, and hoped “the flowers are for Rainie and Stuart’s wedding”.

Viewers know that West Ham United is frequently mentioned among the locals at The Queen Victoria pub in the BBC soap, being one of the nearest clubs.

Just days before Dennis died, Sharon bought her son tickets to a West Ham United match as a peace offering.

But with Rainie currently filming scenes weeks in advance, could the flowers still be for Dennis?

Tanya was keeping tight-lipped, however, sworn to secrecy by show bosses.

Do you think EastEnders scriptwriters might kill off someone else? Leave us a comment on our Facebook page @EntertainmentDailyFix and let us know what you think!