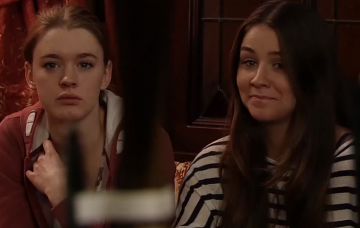 Unfair warning, as it turned out!

Amy James-Kelly was told she would “never work again” when she left Coronation Street.

The Safe star played Sophie Webster’s on-screen lover Maddie Heath from 2013 to 2015, but as she was preparing to wave goodbye to the cobbles a mystery person claimed she would struggle to ever find acting work again.

She wrote on Instagram: “In my final two weeks at #Corrie someone told me, to my face, I would never work again.”

However, Amy’s career has gone from strength to strength; she has landed a role in BBC TV drama Jericho, and earlier this year starred in BBC’s Moving On and Netflix thriller Safe – and the 23-year-old star has now landed a role in her first motion picture.

She added: “Today, I was driven out of Pinewood Studios after a two day, green screen shoot as part of my first film.”

Amy quit Corrie after 18 months in Weatherfield because she wanted to explore other opportunities in the acting industry.

She said in a statement at the time: “I made the decision to leave because I’m young and adventurous and I want to gain more experience and explore and improve my craft.

“Acting is my passion and I’m excited to see where it takes me.

“I’ve had the most amazing 18 months and I’ll be sad to leave my Corrie family.

“It’s been like a second home but like all young people, you eventually fly the nest. I can’t thank everyone enough who made this, not only possible, but fantastic.”

Stuart Blackburn, who was the soap’s executive producer at the time, said: “Amy is a talented young actress and we wish her every success for the future.”

Maddie was killed off when an explosion at the building yard sent her flying across the street, and she passed away in hospital a few days later.

Do you miss Maddie on Coronation Street? Let us know what you think by leaving us a comment on our Facebook page @EntertainmentDailyFix!