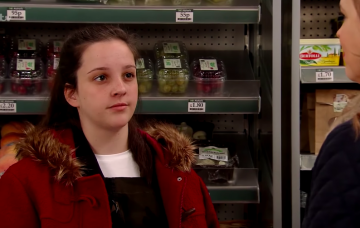 She tweeted: “I passed my driving test the other day and finally got to go through the McDonalds drive-thru.”

Elle thanked everyone for their comments tweeting: “Thanks for all the lovely comments about me passing my test.”

Thanks for all the lovely comments about me passing my test 💓💓💓

Last year in November, Elle revealed she passed her driving theory test just one month after she turned 17.

In August the actress told of her excellent GCSE results and later told her Twitter followers she was going to be starting college.

Amy, her mum Tracy and her half-sister Emma, along with many other Coronation Street residents made their way to Blackpool so Rita could scatter the ashes of her late husband Dennis Tanner.

But the trip didn’t go to plan and poor Dennis’s ashes got run over by an ambulance.

Later, Rita passed on her wedding ring, which once belonged to Elsie Tanner, to Amy.

Amy has already been through a lot in her life.

When she was young, her mother went to prison for the murder of boyfriend Charlie Stubbs but was released in 2010, the year Elle took on the role.

Last year, Amy was shocked to discover she was pregnant at the age of 14.

It was soon revealed that the father was gang member Tyler, who had previously terrorised Amy’s cousin Simon.

Amy decided to have an abortion and told Tracy and dad Steve that she miscarried.

Eventually she told her mum the truth.

Last year, she got another shock when she learnt cobbles resident, hairdresser and barmaid Emma Brooker was actually her half-sister.

It was revealed Steve’s ex-girlfriend Fiona Middleton was pregnant when she left Weatherfield in 1998.

Although Amy was happy to have an older sister, Tracy wasn’t completely thrilled as she feared what residents thought of Steve.

Recently Steve and Tracy’s marriage was on the rocks after he learnt she had cheated with solicitor Paula Martin.

The pair have been trying to fix their marriage, but will it work?