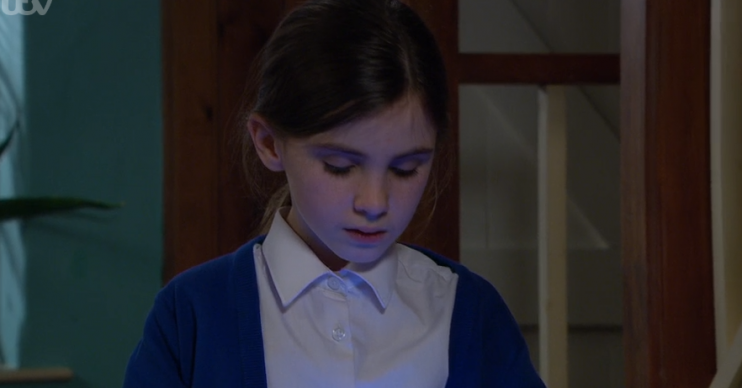 April is being picked on after Marlon was charged with murder

Amelia Flanagan, who plays April Windsor in Emmerdale, has left fans heartbroken with her performance in April’s bullying storyline, which kicked off last night.

In her short life, April has been through a lot and her latest plot includes being picked on for what happened to her dad, Marlon.

Marlon was released from prison last week after being wrongly convicted for Graham Foster’s murder.

Although April was happy that her dad had returned, his outburst at family member Mandy Dingle left her upset.

But it’s become obvious that there’s another reason for April being down about her dad’s release.

In last night’s episode (Monday March 2 2020) Marlon returned home drunk after a day out with Ellis and Billy.

As April’s family gathered in the kitchen to make a pizza, she received a text from an unknown number saying: “Your dad’s a murderer.”

She told her family she had homework to do and would join them when dinner was ready, before heading upstairs to her room.

Fans were heartbroken by what April is facing and praised actress Amelia Flanagan for her performance.

Poor April what a brilliant actress Amelia is

April is such a good little actress #Emmerdale 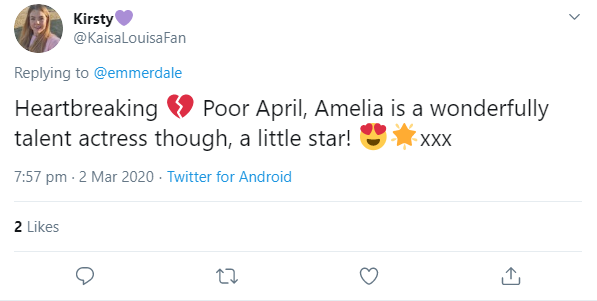 April is being bullied 😓 #Emmerdale

When Marlon discovers that April is being picked on he tells her that real friends are loyal and trustworthy.

Although Marlon tries his best to help, it’s clear April is deeply troubled.

What a brilliant actress Amelia is.

Will she get help to stop the bullying?

On top of finding out about April’s troubles, Marlon also discovers this week that his cousin Charity and her son Ryan stole Kim’s money from Graham the night he was killed.

The Dingle family are shocked when Charity admits she had information that could’ve seen Marlon released from prison a lot sooner.

But things go from bad to worse when he finds out Kim may have hired someone to kill Graham.

His distrust in everyone reaches boiling point and soon he’s telling the Dingle clan that he’s washing his hands of them all.

Has he really disowned his whole family?