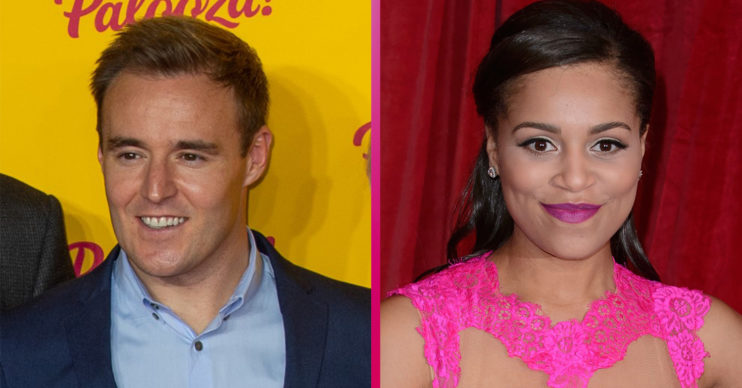 The cobbles favourite tucked into a huge candy themed cake

Alan Halsall has treated his daughter Sienna-Rae to an incredible cake on her seventh birthday.

The actor – who plays Tyrone Dobbs on Coronation Street – went out all for the youngster as they celebrated in his Manchester home over the weekend.

The pair were joined by Alan’s former co-star and girlfriend Tisha Merry, with the group posing for a sweet snap on Instagram.

The shot showed the trio smiling alongside a huge candy cake.

Sharing the special moment with fans, Alan, 38, wrote: “What a way to celebrate my little princess Sienna’s [seventh] birthday!

I love you Sienna & love seeing that smile on your face.

“A weekend full of fun, laughter, dancing and presents! Everything a little girl could wish for.

“I love you Sienna & love seeing that smile on your face #Siennais7 #happybirthday #thanksTish.”

Fans rushed to compliment the shot, with one writing: “Love the cake. Happy birthday Sienna. Hope you had a lovely day.”

A second said: “Great picture and I love the cake.”

Tisha, 27, later commented: “Hehe look how happy she is.”

Last week, Alan took to Instagram to share a special tribute to his daughter on her birthday.

Addressing his 209k followers, Alan wrote of how proud he is to be the little one’s father.

He said: “My baby Girl is 7. 7 years has flown princess & I have had the greatest time of my life watching you grow into the most beautiful, loving, funny, intelligent little lady.

“I burst with pride every time you call me Daddy. Happy 7th Birthday. I love you to the moon & back Sienna…. forever & ever.”

The pair, who met Corrie and married in 2009, currently co-parent their little one.

Since their split, Alan has moved on with new love Tisha.

The former cobbles star previously gushed over Alan as a father, revealing he’s “so caring and loving”.

Opening up on their future baby plans, Tisha told OK! magazine: “He’ll be so amazing. When we were still friends, I got asked to babysit and asked Alan to come along.

“We got there and it was just Alan babysitting. He’s such a good dad; he’s so caring and loving.

Meanwhile, Alan said: “We’ve never had a proper serious sit down but we’ve discussed the future together.”