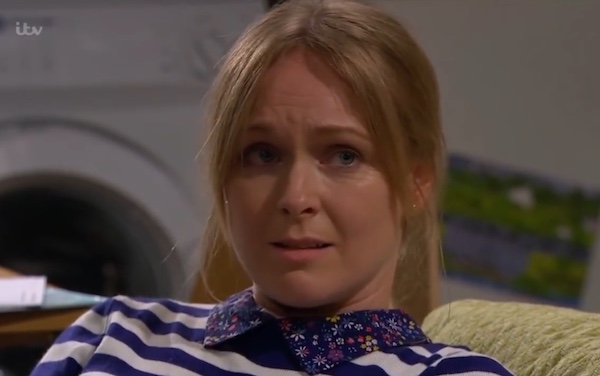 By day a hard-working vet, by night half of hot soap couple Vanity

Vet Vanessa has never been more popular in Emmerdale since her surprise hook-up with Charity in 2018.

It seems a long time since she was obsessed with best pal Rhona Goskirk and enabled her painkiller addiction. Vanessa has learned from her mistakes.

Winningly played with heart and humour by Michelle Hardwick, Vanessa is a fiercely loyal friend and partner with a strong sense of wrong and right.

She’s no pushover as various people have found to their cost since she first appeared on screen in 2012.

Who are Vanessa Woodfield’s mum and dad?

Vanessa’s mum is Jenna Woodfield who has never been seen on screen.

Her dad ws jailbird and love rat Frank Clayton. He walked out on ‘Teeny’ as he used to call her and her mum when Vanessa was 10 years old.

Unsurprisingly, it was not the smoothest of rides since Tracy’s then fiancé David Metcalfe got in touch with Frank in prison and reintroduced him into Vanessa’s life.

Dad and daughter managed to move forward together, so it was utterly harrowing when he was killed in a devastating fire explosion at the factory.

Who are Vanessa Woodfield’s siblings?

Vanessa’s half-sister is Tracy Shankley, the daughter Frank had with another woman after leaving Vanessa and her mum.

Although Vanessa said she always wanted a sister she and Tracy didn’t get off to the best of starts; Vanessa called Tracy’s mum a skank and then they emptied a jug of gravy and a pint of beer over each other in The Woolpack.

They made up when Vanessa overheard about all the presents that Frank used to take back off Tracy to give to Vanessa. She threw a special 27th 1990s themed birthday party for her half-sis.

Vanessa and Tracy lived under the same roof at Tug Ghyll with Vanessa’s little lad Johnny until Charity suggested they move into The Woolpack.

Who is the father of Vanessa Woodfield’s child?

This was a minefield for Vanessa.

Could it be fit young irresponsible boy racer boyfriend Kirin Kotecha? Or was it grumpy Adam Barton (Adam Thomas) who Vanessa had a drunken one-night stand with when she and Kirin were on a break?

Kirin’s meddling dad Rakesh doctored the paternity test results so that it looked like it was Adam’s. But a tell-tale birth mark common in dual heritage babies scuppered that.

Adam was devastated when he finally discovered he wasn’t the dad and briefly did a runner with Johnny. And then Kirin proved to be far too immature to cope and bailed.

Johnny and his mum had a nasty scare when Lachlan’s dad drove off with him in the back of the car he’d nicked after torching The Woolpack.

How did Vanessa Woodfield and Charity Dingle first get together?

The first magic spark was in The Woolpack cellar with the aid of a bottle of whisky and some persuasive super-hero role playing (a tribute to Finn Barton after his funeral).

At first Vanessa was appalled that she’d fallen for such a bad girl but the pair have become each other’s rocks, seeing each other through some very tough times.

Vanessa’s support through Charity’s court case with DI Mark Bails, the police officer who raped Charity and sold her to other men when she was 14, was vital.

And Charity was there for Vanessa when her unlucky girlfriend was stabbed with a broken bottle outside The Woolpack by Lachlan’s dad Donny who was actually targeting Belle Dingle.

Less successful was Charity’s last minute marriage proposal to Vanessa when she hijacked another couple’s wedding car at Home Farm calling herself Fantasia.

Their love though is enough to make fans swoon. “Wherever you are,” Vanessa once said to Charity, “that’s my special place.”

The relationship is set to face its toughest challenge now, as Vanessa has just been diagnosed with Stage 3 bowel cancer.

Who does Vanessa Woodfield work with at the vets?

Vanessa works at the surgery with Paddy Kirk, Rhona Goskirk and trainee Jamie Tate with his mum Kim Tate as a silent partner in the practice.

She was suspended for 12 months in 2018 when Gabby and Liv nicked Ketamine from her veterinary bag and spiked Lisa’s drink thinking it was Daz’s.

She didn’t see eye to eye with Rhona over the inclusion of Kim Tate in the business.

What was Vanessa Woodfield’s obsession with Rhona Goskirk?

Vanessa and Rhona were old college mates. It was Rhona who invited Vanessa to step in as a locum at the vets when she had to fire the previous one.

Things changed massively though when Vanessa discovered that Rhona was stealing pain killers (off Sandy) to deal with a back problem.

Vanessa agreed to get Rhona more if she ‘fessed up to her addiction but Rhona then used Vanessa’s strong feelings for her to manipulate her to get more pills.

When Rhona got together with her rapist husband Pierce Harris it was Vanessa who was the first to see through him. But Pierce played on her jealousy and did his best to turn Rhona against her concerned mate.

Recently Pierce made a comeback after being released from prison for raping Rhona. After killing Rhona’s fiancé Graham Foster, he held Vanessa and her young son hostage.

Who else has Vanessa Woodfield dated?

Apart from Charity and Rhona, Vanessa has not had that many relationships in the village.

She had a snog with Pete Barton at Moira and Cain’s wedding which didn’t go down well with Debbie Dingle when she saw them together just after it.

A one-night stand in town turned out to be a lot more complicated when the lad in question was identified as 17 year-old Kirin Kotecha, Priya‘s stepson.

Kirin showed his immaturity when Vanessa found a lump in her breast and he failed to step up to support her. And then of course there was Adam Barton.

“I’d rather poo a porcupine.” – Vanessa to Charity in their early courting days when Charity asked her out for a coffee.

What’s your favourite Vanessa Woodfield moment? Leave us a comment on our Facebook page @EntertainmentDailyFix and tell us!