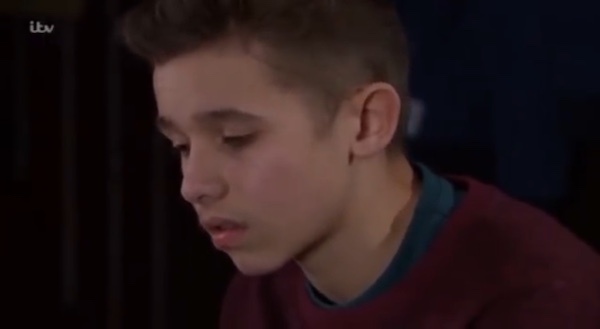 Confused teen, terrible with booze, abused by his teacher

Jacob Gallagher is the teenager at the heart of one of Emmerdale’s most controversial storylines of recent years having been groomed by his history teacher, Maya Stepney.

Played with heart and sensitivity by Joe-Warren Plant it has been especially upsetting for fans of the show, who have watched Jacob grow up onscreen, to see him in such emotional turmoil.

Jacob has always struggled with relationships with girls. He made a mess of things with Gabby Thomas and more recently with Liv Flaherty.

As his history shows he has had plenty to deal with in his time in the village and it looks like there is a lot more pain to come.

When did Jacob Gallagher first appear in Emmerdale?

Jacob’s first appearance was at his maternal grandma Yvonne’s funeral in August 2010. Things kicked off with a massive row between sisters Alicia and Leyla.

Alicia and Jacob moved to the village after the break-up of her marriage to Jacob’s dad, Justin Gallagher, a break-up caused by Leyla having a one night stand with Justin.

One early drama was Jacob going into anaphylactic shock after eating a birthday cake with traces of nuts in it.

That was followed by Jacob going missing when his dad failed to show up for his first nativity play. Jacob went looking for him and fell through the floor in a deserted building on the moors until David rescued him.

Who is Jacob’s biological mum and adoptive mum?

It wasn’t until 2013 that Jacob finally found out from Alicia that ‘Aunty’ Leyla was actually his birth mum and unsurprisingly he didn’t take the news well.

After crying his eyes out Jacob ran away and hid at Holdgate farm where he was found by Priya and best pal Noah. Still disgusted that he’d been lied to Jacob decided to stay with The Sharmas.

Jacob did eventually forgive Alicia and moved back home. But they were separated again when Alicia was sent to prison for punching Val Pollard.

While his relationship with Leyla remained strained Jacob showed just how much he loved Alicia when he smashed up Home Farm with a golf club after Lachlan sexually assaulted her.

What Jacob’s feelings for Leyla will be now she’s told him she has killed his abuser/love of his life Maya remain to be seen.

How is Jacob related to David Metcalfe?

“If I sound like your dad, truth be told I wish I was.” David Metcalfe has been like a dad to Jacob through most of his time in the village.

First David dated Leyla and would babysit Jacob when Alicia was at work. Then when Leyla left the village and Alicia and David slowly fell in love David had even more to do with the lad.

It was David who Jacob stayed with for the year that Alicia spent in prison.

There have been plenty of ups and downs. Being lied to is one of Jacob’s biggest no-nos and he took ages to forgive David for keeping the secret about Leyla.

He was also furious when David didn’t tell Jacob that his cancer had been misdiagnosed and tried to send Jacob back to Portugal to protect him from the news.

Their relationship is about to undergo its greatest ever test when David finds out that Jacob has been groomed by his girlfriend Maya and that the pair have slept together behind David’s back.

How was Jacob first groomed by Maya Stepney?

It first started when 15 year-old Jacob stuck up for Maya when she was under attack from her bitter ex-stepdaughter Leanna.

From there she snaked her way in by offering to help him with his mocks and course work – “all these teachers wanting something from you” – praising him for his ambitions and maturity.

She plied him with champagne for getting her a considerate birthday present which led to him giving her a confused kiss. That Christmas she kissed him.

By his 16th birthday party there was no doubt what she intended and a few days later they ended up in a hotel she’d booked for the night.

What is Jacob’s relationship with Gabby Thomas?

“She’s older, isn’t she? She doesn’t know that I’m alive.” That was Jacob asking stepdad David for advice about another ‘older woman’ long before Maya, fellow teenager Gabby Thomas.

Jacob was the innocent and Gabby the wild child. At first Jacob couldn’t cope with her but when they nicked some cider and played the game ‘Have I Ever’ they ended up snogging at Mulberry Cottage before being caught by Laurel.

Things went sour when Gabby saw Jacob hugging Liv and thought they were together after Liv had kissed Gabby at the cricket pavilion.

When Jacob got drunk at his 16th birthday party after being messed around again by Maya Gabby told him off for being mean to Liv and stormed out. It has always been a complicated friendship.

What is Jacob’s relationship with Liv Flaherty?

Poor Liv. Of all the lads to fall for when she was already confused about her sexuality Jacob was probably the worst possible choice.

When they first met in 2016 all Liv was interested in was scamming Jacob. When that didn’t work she chucked some fruit at him.

Then when she developed real feelings for him two years later she had no idea he was already being abused by Maya.

It was Maya who suggested to Jacob that pretending to go out with Liv could provide the perfect cover for them.

On his 16th birthday Liv stumbled into the love nest Jacob had made for Maya but Liv told him she wasn’t ready. Later a drunken Jacob shamed Liv in front of their mates.

When a shocked Liv actually caught Maya and Jacob in the act it was no surprise that she was so hurt that she tried to get revenge by blackmailing them.

“You need to stop telling me what to do. Everyone does. Or they’re in for a shock.” – Only Maya knew what a drunken Jacob was talking about when he nearly revealed everything on his 16th.

What is your favourite Jacob moment? Leave us a comment on our Facebook page @EntertainmentDailyFix and let us know what you think!