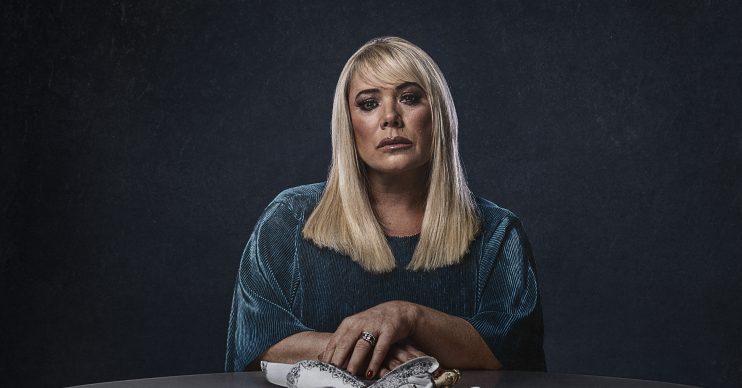 Daughter of Den and Ange, married two Mitchells, and recently lost a child

It’s no wonder Sharon Mitchell, nee Watts, often looks so pensive in EastEnders.  She’s got a lot on her plate and always has done where family matters are concerned.

Memorably played by Letitia Dean since the soap began in 1985, Sharon’s mixture of East End front and vulnerability has somehow navigated her through all sorts of drama.

There aren’t many women who could survive being married to one, let alone two, of the infamous Mitchells.

As the daughter of Den and Angie Watts clocking all the goings on from behind the bar of The Queen Vic has stood her in good stead.

35 years on her life is as fraught as ever. She’s just given birth to a new son, Kayden, but while she was in labour, her eldest son, Denny, drowned in a boat crash.

When did Sharon Watts first appear in EastEnders?

When she wasn’t busy trying to keep the peace between her battling mum and dad she hung out with best pal Michelle Fowler (Susan Tully).

That friendship became a hell of a lot more complicated after Michelle had a daughter, Vicki, when she was 16 and the dad turned out to be Sharon’s rotter of a dad, Dirty Den.

Only when Vicki got meningitis did Sharon put the betrayal behind her and offer her friend support. Years later, after Sharon and Grant Mitchell split, Michelle and Grant had a one-night stand.

The same year Michelle returned from living in Florida (played by Jenna Russell). The recasting of a legendary EastEnders character proved unpopular and Michelle left again in 2018.

Who were Sharon Mitchell’s mum and dad in EastEnders?

Her early years were spent watching them tear chunks out of each other until Den served Angie with divorce papers on Christmas Day 1986 in that all-time classic ep.

In 1988 Angie emigrated and died of cirrhosis of the liver in 2002. Den got involved with gangland crime and was shot walking along the canal by a bloke with a bunch of daffodils.

He rose again from the dead in 2003 before being sent back to his grave for good with the help of an iron doorstop wielded by wife no.2 Chrissie (Tracy-Ann Oberman).

Sharon’s birth mother is Carol Hanley (Sheila White) who gave Sharon up when she was three years old. Sharon tracked her down but there was no bond.

How old is Sharon Mitchell in EastEnders?

She certainly didn’t knock back the vino to celebrate her big birthday as she was carrying the ticking time bomb that was Keanu Taylor’s baby.

It may be the biggest mistake she’s ever made but there’s no doubt that for a while her affair with Keanu put a real spring in her step.

What was the hit single that Letitia Dean sung as Sharon Watts in EastEnders?

That catchy little number which got to no.12 in the UK singles chart in November 1986 was called Something Outa Nothing.

The rest of The Banned comprised Ian Beale on drums, Eddie Hunter on guitar and Simon Wicks on keyboards.

The most successful band member turned out to be Nick Berry who played Wicksy. Every Loser Wins was a no.1 hit for Berry knocking Madonna’s True Blue off the top slot.

The Banned split after political activist Eddie scuppered their performance in the contest. It was for the best.

How many times has Sharon Mitchell been married in EastEnders?

With Dirty Den as her adoptive dad it was inevitable that Sharon should be attracted to bad boys. Although not at first.

She had a teenage fling with Ian Beale (Adam Woodyatt) and even got engaged to church curate Duncan Boyd in 1987 but she got bored of the vicar and his sensible knitwear.

Sharon started dating Falklands veteran Grant in 1990. Insanely jealous, Grant did buy her The Queen Vic as a wedding gift.

Her affair with Phil began in 1992 after Grant smashed up The Vic frustrated that Sharon didn’t want to have children. The following year Grant was imprisoned for assaulting Sharon.

A chat between Michelle and Sharon accidentally recorded by Michelle’s journalist boyfriend provided the smoking gun. Grant played it to a packed pub at Phil and Kathy Beale’s 1994 engagement party and kaboom.

Phil and Sharon got together properly in 2001 when Sharon anonymously bought The Queen Vic back off Peggy Mitchell (Barbara Windsor) but it all went wrong when Sharon thought she was infertile.

Sharon and Dennis married 29 August 2005 and Sharon got the shock of her life when she discovered she was pregnant on Christmas Day that same year.

With Sharon pregnant she and Dennis were planning a new life in the States but on New Year’s Eve Dennis was stabbed as he made his way across the Square to his love.

The hooded assassin’s face was covered but it was Johnny Allen’s henchman Danny Moon (Jake Maskall), a revenge killing after Phil encouraged Dennis to beat up Johnny.

As Sharon rushed to him and saw his blood-stained sweatshirt he reached out and stroked her bump.

“We did it,” were his final words. Or were they? Fans still hope that somehow Dennis can return from the dead one day.

Who played Sharon’s son in EastEnders?

Denny was never an easy child, which is hardly surprising considering his troubled childhood. He was kidnapped by Sharon’s dodgy fiance John Hewland and was lied to about his dad’s death.

Denny was bullied at school and he retaliated. He then got himself involved with local gangs much to his mother’s horror.

“The only time you care about me is when it suits you,” said Denny. “I was bullied, I was beaten, I even needed stitches. And where did you go? Australia.”

In a flashpoint that shocked fans Denny punched Sharon in the face.

Read more: The best soap affairs of all time

He was exposed by Ian Beale for spreading racist hate about Ian’s son, Bobby, leading to Bobby being beaten up and fighting for his life.

Ian confronted Dennis while the residents of the Square were partying on board a boat on the Thames to celebrate The Vic winning pub of the year.

After Dennis gave him backchat and kneed him in a sensitive area, Ian locked Dennis in the boat’s locker room, intending to hand him over to the police once they docked.

However, Phil was on deck having a showdown with Sharon’s baby daddy, Keanu, and their fight caused the boat to crash.

As the lower decks began to take on water, Ian tried to get Dennis out, but after dropping the keys, he struggled.

Ian eventually freed Dennis, but as they were swimming to safety, a surge of water came in and Dennis drowned.

He was 13 years old at the time of his death.

While all this was going on, Sharon was giving birth to her youngest son, Kayden, in the funeral parlour, with Kathy Beale by her side.

Who is the father of Sharon Mitchell’s baby Kayden in EastEnders?

Oh, Sharon. He’s a lovely lad and very easy on the eye even when he occasionally keeps his clothes on but this was never going to end well.

Sharon’s affair with the fiancé of her stepdaughter, Louise Mitchell, had already ended when she fell pregnant.

An ill-advised one-night stand between the former lovers after Louise told Keanu she had aborted their baby, saw Sharon end up with child.

A pre-natal DNA test proved it wasn’t Phil’s baby, but Sharon decided to pretend that it was. Keanu agreed to go along with it.

But the truth came out when Phil got suspicious and a huge Christmas showdown led to Sharon being turfed out on her ear and Keanu presumed dead.

In fact, Martin Fowler, who had been tasked with killing Keanu, and Linda Carter, who had drunkenly stumbled upon the scene, faked Keanu’s death and allowed him to escape.

When Keanu got word Phil had left Walford, he came back, demanding £100,000 from Ben Mitchell, having kidnapped Ben’s boyfriend Callum Halfway.

Sharon originally agreed to run away with Keanu, but seeing Dennis needed her to focus on him and the impending arrival, Sharon decided to leave with just her kids.

However, the day never came and it was Keanu who broke the news of Denny’s death to her in the hospital hours after she’d given birth.

She’s so overcome with grief she even tried to take her own life and admitted she doesn’t want her new baby.

Ian is doing all he can to support his best friend, while harbouring the awful secret that he was in large part responsible for Dennis’s death.

Sharon thinks Ian tried to save her son, but Dotty Cotton is about to hear the answerphone message Dennis left for his mum the night he died, telling her Ian had locked him in the boat.

Once the truth comes out, it’s likely Sharon and Ian’s friendship will be irreparably damaged forever.

“Use that money for a nose job. Well come on, who’s next?! If I ever see you near my son again you’ll need more than your nose fixing. Give him a tissue will ya.” – Sharon thumps one of Dennis Jr’s dealer gang mates.

What’s your favourite Sharon moment? Leave us a comment on our Facebook page @EntertainmentDailyFix and let us know!