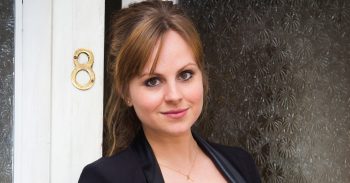 Born on Coronation Street, Sarah Platt – or Sarah-Lou in the 90s – had a rebellious few years in her teens, getting pregnant twice, but now she’s turned into quite the sensible mum.

Happily settled with Gary Windass – or so she thinks – she’s never far from drama either.

From her early years to now, here’s a short history of Gail’s only daughter.

Sarah and the Platt family

She dropped the ‘Louise’ part of her name when she returned to Weatherfield following eight years living and working in Milan, revealing the news to the viewers by snapping at Gail: “How many times, Mum, it’s just Sarah!”

Gail’s only daughter was constantly locked in a battle with her half-brother, David (Jack P Shepherd), especially after toddler Bethany took an ecstasy tablet which David had hidden in one of her dolls. David then pretended to attempt suicide on Sarah’s wedding day to disrupt the nuptials.

The feud resulted in her leaving the cobbles for eight years before her return in 2015. They seem to have put their differences behind them since then, coming together to cover up Callum’s murder.

Other brother, Nick Tilsley (Ben Price) seems to have very little loyalty to his sister, displayed when he coerced her other half, Gary Windass (Mikey North), to lie to cover up who was really responsible for the collapse of the factory roof, against Sarah’s wishes.

Days after her 13th birthday in February 2000 Sarah discovered she was five months pregnant. She gave birth to Bethany Platt in June 2000 and juggled her new responsibilities with rebelling.

After a joy-ride with bad boy Aidan Critchley left her with severe head injuries, Sarah got back with former boyfriend Todd Grimshaw (Bruno Langley) and they moved in together. They got engaged and she fell pregnant with her second child when she was just 16.

But Todd broke her heart when he revealed he was gay and Sarah dumped him. The stress saw Sarah suffer a placental abruption and go into premature labour. Their son, Billy, died after three days.

Sarah hasn’t had the best luck with men. Despite the speed with which her relationship with Todd catapulted forward, she was distraught when she found out he’d kissed her brother, Nick.

Todd lied it was a drunken moment and desperate not to be a single mum again, Sarah forgave him, but he then began an affair with nurse Karl Foster, causing him and Sarah to split for good.

She then dated his older brother Jason (Ryan Thomas) and they got engaged and set a wedding date. They married, but her feud with David was to come between them when she planted drugs on her sibling to stop him moving to Milan for a job in fashion.

Sarah took the job instead, but Jason left her and Bethany to go alone when he found out what she’d done to David.

When Sarah returned in 2015 she started a relationship with Callum Logan. Drug dealer, her sister-in-law’s ex and all round bad egg, Callum knew being with Sarah would rile David – and that probably spurred Sarah on to.

She finally found out what Callum was really like and ended things, but he later tried to rape her when she, Kylie and David laid a trap to get rid of him. Kylie saved her in the nick of time, killing Callum, and the resulting cover up left Sarah struggling.

She soon discovered she was expecting Callum’s baby and after Harry was born, Sarah suffered post-partum psychosis and was admitted to hospital.

Looking for a far quieter life, Sarah has settled down with Gary. But true love never does run smooth!

He’s been a rock for her, supporting her through Bethany’s troubles including a bullying ordeal, addiction to diet pills, and her grooming at the hands of Nathan Curtis (Chris Harper).

But he’s not been without fault. A one-night stand with Nicola Rubinstein resulted in the birth of their son Zack, something which Sarah eventually forgave him for, but things have never really been the same since.

Sarah has almost cheated with Adam Barlow and seemed to lead young Seb Franklin to believe she was interested in him.

Gary meanwhile is turning aggressive. He’s got himself in mountains of debt and is about to start doing the bidding of terrifying loan shark Rick Neelan.

It doesn’t look like happy ever after in paradise is on the cards for these two.

“I’m just one mum to another telling you there is nothing I won’t do to protect my own, right, nothing.”

Sarah tells the mum of Bethany’s bully, Lauren, she’ll go to any lengths for her family – proven by the Callum killer cover up.

Read more: Sarah and Gary: a short history of their relationship

What’s your favourite Sarah Platt memory? Leave us a comment on our Facebook page @EntertainmentDailyFix and let us know what you think!