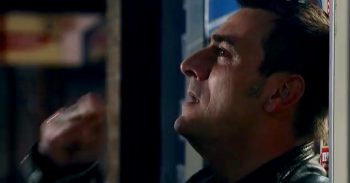 As a former bookie Coronation Street’s Peter Barlow is painfully aware how much the odds in life have been stacked against him.

Booze has been his usual way of coping – or not. Having served in the Royal Navy in his youth he is also partial to the odd dash for the coast when the going gets tough.

Corrie has smartly paired Chris with fellow acting powerhouses like Alison King, Jane Danson and Georgia Taylor. As a result Peter’s suffering, perversely, has been a joy to watch.

“I was six when he packed me and Susan off to Scotland. Six years old. With a hug, a Mars bar and no explanation.”

Peter has spent his whole life blaming dad Ken for farming off his kids to their maternal grandparents after their mum, Val, died.

Any grief he’s had with adoptive half-sister Tracy and even long lost half-brother Daniel stems from that.

As Peter explained to him recently: “Here I am again in the backyard of the same terraced house where I was born trying to undo 50 odd years of hurting the people who loved me.”

Ben Price, who plays Nick Tilsley, says he always thinks of classic Peter as leather jacket, in the bookies, having a fag.

Barlow’s Bookies closed in 2013 when Rob Donovan won £35,190 on an accumulator and Peter couldn’t pay out. Although the fire in the flat above in 2008 didn’t do it much good either.

Considering his problems with alcohol Peter’s unlikeliest job was running The Rovers Return when he and Toyah bought it.

As Carla so memorably put it: “Peter running a pub is like putting a cat in charge of an aquarium.”

“I still crave booze every day but it will kill me. It’s the same with you.” It’s not the most romantic thing Peter has ever said to Carla but it may be the most truthful.

They’ve already been married once. In fact, Peter’s been married five times including two at the same time, Shelley Unwin and Lucy Richards in 2003.

His other great love is the exceedingly long-suffering Leanne Battersby. She stuck by him through the very worst of his alcoholism and helped bring up his son Simon.

Sadly Nick Tilsley hit the nail on the head when he said that Leanne married a then dying Peter out of pity. Whatever the outcome Carla is the one for Peter.

Read more: There are more tough times ahead for Peter

Poor Simon. The result of Peter’s bigamous marriage to Lucy, Simon ended up back in Weatherfield when his mum died of cancer.

He has led a perilous life ever since. Simon nearly perished when a drunken Peter set fire to the upstairs flat.

In recent years though, Peter has been determined to learn both from Ken’s and his own mistakes.

He convinced his son to turn in gang member Tyler to the police and took what he thought was a real bullet to protect Simon when Tyler sought revenge.

“There will always be something special between me and Leanne. Something you’ll never have. First love. There’s nothing stronger than that.”

When it comes to pushing Peter’s buttons and literally, deliberately driving him to drink no one does it better than Nick Tilsley.

These days Peter is keeping a lid on it but both men know that Peter’s only a bottle of whiskey away from chucking another of Sally’s garden gnomes at Nick – or far worse.

The last person to experience unhinged Peter was Billy the vicar when he discovered Billy was partly responsible for Susan’s death. The next thing Peter was chucking him into a quarry.

Toyah making Peter believe that Eva and Aidan’s baby Susie was their child by their surrogate Jacqui, who had actually suffered a miscarriage, was pretty far out as storylines go.

What made it so extraordinary were the performances of Chris Gascoyne and Georgia Taylor when the terrible truth finally came out.

All that was left was Peter’s angry, cruel, tear-stained separation from Toyah. “Our baby’s dead and so are we.”

“You see Howard, Ross, everyone, whichever way you look at it, I’m screwed.” – Peter reflects on the carnage of Ken, Deirdre, Tracy and Blanche hijacking his AA meeting.

What’s your favourite Peter Barlow moment? Leave us a comment on our Facebook page @EntertainmentDailyFix and let us know what you think.