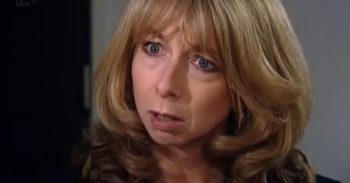 Helen Worth, who plays her so brilliantly, says Gail really came into her own when she got her kids. Now she can lay claim to raising the soap’s most dysfunctional family.

Until recently, Gail was the only Weatherfield parent to have been pushed down the stairs by one of her brood (hi, David), an honour she now shares with Ken Barlow and his son Daniel.

As for her future, we’re hoping she will continue to drive her sons mad helping out at Trim Up North. Perhaps Vin Diesel the Weazle could be husband no. 6…

Raised by single mum Audrey, Gail first appeared in 1974 and actually spent her early years on the street as a lodger for Elsie Tanner (Pat Phoenix) which gave her a broad education.

Gail’s big buddy was roommate Suzie Birchall . The pair brought Seventies fashion to the cobbles though their friendship soured when Suzie made a pass at Gail’s first husband Brian.

She also served as a barmaid in The Rovers and was a bit of a gadabout until marriage changed all that.

You wouldn’t think Gail had it in her but somehow she has created one of the most disruptive families in the whole history of Corrie. The Sopranos have nothing on this lot.

There’s daughter Sarah Lou whose teen pregnancy, aged 13, sent shockwaves through the TV nation. And Sarah’s the best behaved one.

Gail’s golden boy is first son Nick(y), mostly because of the amount of time he’s spent away. When he married childhood sweetheart Leanne aged 17 that all changed and he’s been causing Gail grief, mostly fighting with his half-brother, ever since.

And so to David. Her one child with Martin, David has given Gail (which is what he calls her) untold heartache and nearly been the death of her on more than one occasion. He even terrified her with a bag of peanuts.

Killer romances have always been Gail’s stock in trade. Her first husband Brian Tilsley was stabbed to death outside a nightclub.

Gail’s fifth husband, Michael Rodwell, had a heart attack whilst Pat Phelan looked on and left him to die.

It’s worth noting that none of these were Gail’s fault but Martin Platt, the only one still alive, must count his lucky stars.

Gail as a private detective on the trail of her mum’s trickster beau Lewis Archer is a recent highlight.

Gail did her best to hide behind a laundry basket as she tried to snap Lewis in the act with another woman. Unfortunately all she managed was a selfie.

Gail’s greatest comedy moment though was when she leapt to her mum’s defence after CCTV footage showed Deirdre kissing Lewis.

“Been giving your mum lessons, Gail, on how to pick duds?” Deirdre mocked and Gail let rip with a pie right in the kisser.

In the days when she was still married to Brian, Gail’s greatest foe was his interfering mum, Ivy Tilsley (Lynne Perrie).

Ivy  though was just the warm-up act for Gail’s greatest sparring partner, Eileen Grimshaw. It first kicked off between them when Eileen’s son Todd got Sarah pregnant three years after she had Bethany.

When Todd revealed he was actually gay and had been cheating on Sarah the stress of it all sent her into premature labour and their son Billy died at just three days old.

Gail has never forgiven them and the fights have been spectacular ever since, made worse by Eileen stealing Michael Rodwell off her. The only cease fire was to bring down Pat Phelan.

“Think of it as like we’re going on a holiday.” So said husband no.3 Richard Hillman as he gagged and bound Gail, David and Sarah for their one-way trip to the bottom of the canal.

It was a spectacular end to one of the show’s most gripping (and at times hilarious) storylines.

Richard managed to bump off ex-wives, business partners and poor wrong-place-wrong-time Maxine Peacock but in the end it was Gail (with some help from David) who saw him off.

Eileen has likened her to a shrew but come between Gail and her family and there’s a Rottweiler ready to be unleashed.

“You think your dad running off with another woman is a worse crime than clubbing someone to death. You’re twisted. You’re Norman Bates with a briefcase and I don’t want you living under the same roof as my family.” Gail gives both barrels to Richard Hillman.

Do you have a favourite Gail moment? Leave us a comment on our Facebook page @EntertainmentDailyFix and let us know what you think.