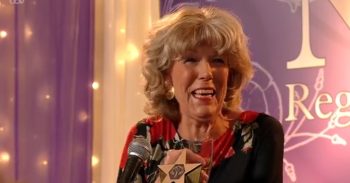 Usually seen with either a pair of scissors or a drink in her hand, Audrey Roberts is someone who adds a certain sparkle to the Street.

In a perfect world Audrey would be a lady who lunches. Unfortunately circumstances have dictated otherwise.

When she’s not busy keeping an eye on salon bookings she’s lending a sympathetic ear to whichever family member has got themselves in trouble.

Perfectly played by Sue Nicholls, Audrey has survived Richard Hillman, Lewis Archer and that Vivian Barford who once got a bit too close to her late husband Alf.

The first stylist in Weatherfield to offer the ‘Farrah Fawcett’ flick, Audrey and her salon might not be so cutting edge these days but they are part and parcel of Street life.

She originally bought the place off Fiona Middleton in 1998 and at times has found keeping it a family business incredibly stressful, especially when employing grandson David.

She lost her best worker, Maria, to arch rival Claudia when she refused to make her a joint partner but thankfully Maria returned after Audrey said she was like a daughter to her.

Before the salon Audrey spent years in the corner shop with husband Alf Roberts though her main job was getting Alf to spend his money. As she said: “What is the point of being the richest man in the cemetery?”

It was all smiles recently at the opening of her grandsons’ hipster barber shop, Trim Up North, but that’s because the proud gran had no idea it was Nick who had swiped her £80,000 windfall.

It’s hard to decide which family member is most responsible for Audrey’s high blood pressure. Her daughter Gail’s appalling choice of men is one factor.

Gail’s third husband, Richard Hillman, set fire to Audrey’s home and did his best to make her doubt her own sanity.

Gail though thinks her mam is to blame. “Brought me up? Five bob behind the mantel before you went out gallivanting” is how she remembers Audrey’s parenting.

“Steeplejack, mud wrestler, I am open to offers…” With an opening line like that how could Audrey and Alf Roberts not end up as more than work colleagues?

She started by helping him out when he went off on holiday. Later when Alf twice became mayor of Weatherfield Audrey found herself elevated to the lofty heights of Lady Mayoress.

Since his death in 1999 there has been the odd spark between Audrey and Ken but really the only other man to come close to stealing her heart (literally) was Lewis Archer.

Conman Lewis toyed with her affections but the tender kiss goodbye she gave him when she found him dead spoke volumes. Audrey will never be on her own though. She’s got Netflix.

Whether they were boozing or shopping, no one was better company for Audrey than Alma Halliwell (Amanda Barrie).

Audrey was there for her pal through the ups and downs of being married to Mike Baldwin and at the very end when Alma died of cervical cancer in 2001.

Since then Audrey has sometimes found Rita a handy drinking partner in The Rovers but they have also had their fair share of fall-outs.

Again Audrey was there when Rita most needed her, at her hospital bedside when she had a brain tumour removed.

Read more: Audrey comes to the aid of a shopper in real life

“One of my best – and certainly oldest – friends,” is how Aud has described her arch rival in hairdressing and love, Claudia Colby (Rula Lenska).

Aud vs Claud is one of Corrie’s great running battles with plenty of barbed wit and snippy asides.

At the North West Hairdresser of the Year Awards, Audrey took hostilities to a whole new level when she knocked Claudia off her perch with a well-aimed bouquet.

Aud and Claud may be frenemies but they value each other’s company more than either of them is prepared to let on.

When Audrey first met conman and male escort Lewis Archer (Nigel Havers) it was no surprise that everyone was deeply suspicious of his intentions.

When he robbed the bookies and later stole £40,000 off Gail their worst fears were confirmed.

And yet despite all his wrong doings Lewis proved to be one of Audrey’s greatest loves and storylines. Could he change? Should she give him one last chance?

As Audrey dared to dream it looked like their shared love of fine wines and Michael Buble might see them through before he unexpectedly died this year on New Year’s Day.

“I wouldn’t take any peanuts in a bowl in a place like this.” – Audrey checks up on great granddaughter Bethany’s dodgy work place, Tassels strip club.

What’s your favourite Audrey Roberts’ moment? Leave us a comment on our Facebook page @EntertainmentDailyFix and let us know what you think.