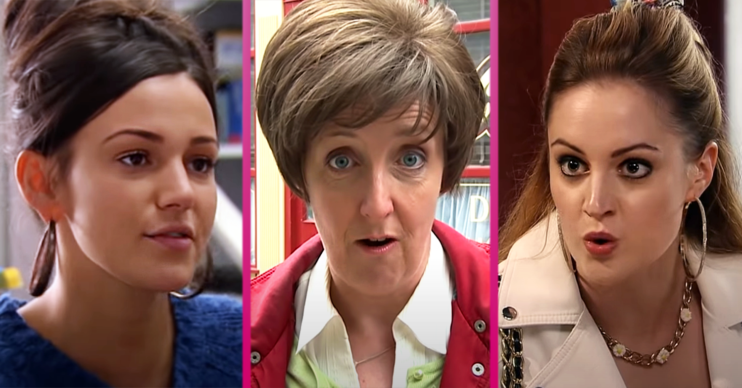 We would have preferred to see these characters leave the cobbles

In the 59 years Coronation Street has been airing, many characters have come and gone, including some such as Maddie Heath, who were killed offf too soon.

While some has simply left Weatherfield for a new life, others were killed off much to the shock of viewers.

But which characters do we think should have survived?

While Michelle Keegan is well known for her roles in popular TV shows such as Our Girl and Brassic, it was her role as Tina McIntyre in Corrie which kick-started her career.

Tina first appeared in 2008 and quickly became a fan favourite.

But after six years on the show, Michelle decided to leave the show. And sadly when actors opt to leave, there is a chance their alter ego will be killed off.

Tina began an affair with Peter Barlow, who was in a relationship with Carla Connor at the time.

Peter and Tina planned to flee Weatherfield together but Carla’s brother Rob became suspicious about Tina and Peter.

But when Peter never showed up at Tina’s flat so they could leave together, she went to the Rovers to find her lover and Carla announcing that Carla is pregnant.

An upset Tina went back to her flat and was followed by Rob. In an upset state, Tina threatened to go to the police about Rob and Tracy buying knock-off gear for the pawn shop.

On the balcony, Rob pushed Tina off. Although she survive the fall, she built up the energy to tell Rob she could have him sent down.

Rob proceeded to attack her with a metal pole. She was taken to hospital after being found by Carla. Surgeons attempted to reduce the swelling on Tina’s brain, but she died in hospital a few days later.

Yasmeen’s son and Alya’s dad, Kal died in the Victoria Court fire in 2015.

Kal had proposed to his girlfriend at the time Leanne, but realised he didn’t have the ring. Just a little while later, Leanne and Kal saw the flats were on fire.

The blaze, which was started by Tracy Barlow, had spread trapping Tracy’s daughter Amy in a flat.

Kal and Leanne went into the burning flat to save the little girl. With the help of the fire brigade, Amy and Leanne got out safely.

But Kal got caught up in the explosion and died.

Maddie Heath in Coronation Street also died in the Victoria Court fire. For a while, she and girlfriend Sophie suspected something wasn’t right with Kevin’s girlfriend Jenny.

And their fears were confirmed when Maddie caught Jenny trying to kidnap Sophie’s little brother Jack.

As Maddie got out of the house to warn her girlfriend, she ran by the builders yard. However the fire had spread causing a gas canister to explode.

The teenager got caught up in the explosion and later died from her injuries.

In 2014, viewers were devastated when Hayley was killed off after 16 years on the show.

In 2013, she was diagnosed with pancreatic cancer. During her final months, Hayley and Roy made sure to do all the things they wanted to do together.

But as Hayley started to get weaker, she decided she wanted to take her own life.

She prepared a lethal cocktail and died in Roy’s arms.

Although it wasn’t likely for Hayley to survive, we all wish there was a way for her to stay around on the cobbles for a while longer.

David’s wife Kylie was sadly killed off in 2016.

As she and David decided to move to Barbados to live with her sister Becky, David and Kylie planned to celebrate.

But their joy was very short-lived. As Kylie was walking back home, she saw her friend Gemma being assaulted by Clayton Hibbs at the kebab shop.

Kylie stepped in to help her pal but Clayton ended up stabbing her in the chest.

She later died in David’s arms on Coronation Street, leaving him heartbroken.

Katy’s death came as a shock to viewers as it didn’t happen on-screen.

The popular resident was played by Georgia May Foote from 2010 until 2015.

During her time in Weatherfield, Katy started a relationship with Chesney Brown and fell pregnant.

Katy gave birth to their son Joseph at just 17 years old. But she and Chesney weren’t meant to be, as she started having an affair with Ryan Connor.

Eventually Katy decided to move to Portugal with Joseph, so she could be near her mum.

After being off-screen for over two years, Izzy learnt her sister had been killed in a car crash. But luckily Joseph wasn’t in the car.

Chesney travelled to Portugal to support his son at the funeral and bring him back to Weatherfield.

Lewis and Audrey had been on and off for years. Lewis had conned the Platt family on more than one occasion.

But as it looked like Lewis had changed, Gail began to suspect he was trying to con Audrey again by taking her recently inherited £80,000.

As Lewis died, the £80,000 vanished from Audrey’s account and she believed he had conned her once again. Months later it was revealed Audrey’s grandson Nick took the money.

When Andy got evidence of serial killer Pat Phelan talking about his flat scams, he planned to take the evidence to the police.

But Phelan kidnapped Andy, keeping him in the basement of an abandoned house for months.

He kept Andy alive by giving him what he needed. Phelan told Andy he would let him go if he killed Vinny Ashford – Phelan’s former business partner.

Phelan killed Andy after forcing the barman to kill Vinny.

For months, viewers presumed Andy was dead and not long after discovering he was alive, he was killed off – which seemed a strange move!