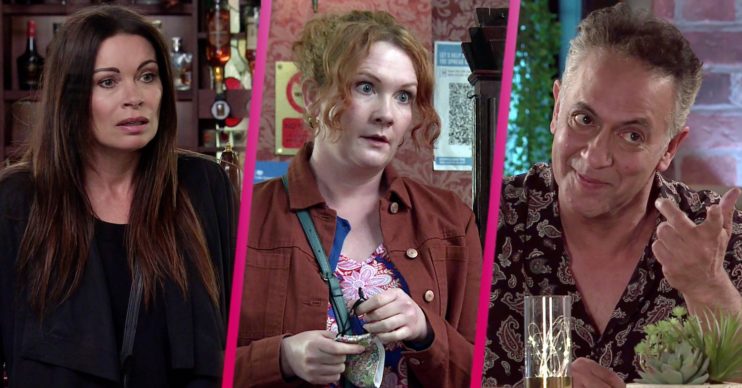 7 Coronation Street spoilers for next week including health horror, a custody battle and shock new romance?

Hope begins to act out again

Coronation Street spoilers for next week reveal Peter goes for his transplant.

Meanwhile Fiz is worried for the girls’ safety with Alina and things take a new turn in Dev and Bernie’s relationship.

Carla is still frosty with Sarah claiming that Adam has signed Peter’s death warrant by pulling out of the transplant.

Daniel breaks the news to Peter that his liver isn’t compatible.

Later Adam and Daniel are in the pub when Carla comes in and drops the bombshell that the transplant centre has a liver for Peter, but she can’t find him.

Daniel soon finds Peter in the Bistro weak and about to collapse. He explains the hospital has found a match for him.

Carla says an emotional goodbye as Peter readies himself for the op. Will the transplant be a success?

Tyrone realises he’s double booked work and having the girls and Alina offers to help.

Hope convinces Alina that Fiz won’t mind if she gives her eyelash extensions.

Fiz is thrilled when Sarah offers her some flexible hours at the factory as a machinist, until she learns it was Alina’s idea.

Later Fiz goes to get the girls from the flat. How will she react to Hope’s new makeover?

Meanwhile Tyrone gets a call from the school asking him to collect Hope as she’s been playing up.

Back on the street, Hope takes her mood out on Alina before running into the road.

Ronnie manages to stop in time and Alina explains Hope ran in front of the car to scare her. as Fiz approaches, what will Hope’s story be?

3. Fiz and Tyrone battle for custody?

Later, Fiz tells Tyrone she needs to put the girls’ safety first and he can’t see them till there’s a consent order in place.

He’s horrified and points out Ruby is his daughter. Fiz reels and Evelyn is furious at Tyrone’s comment.

Soon Fiz goes to Adam for help. Later she’s furious to find out Tyrone has been clubbing with Alina again.

When she reveals she intends to apply for a parental consent form for Ruby, Tyrone is stunned and vows to fight her all the way.

Tyrone is arriving back from a breakdown call when Craig approaches Tyrone. As he smells alcohol on him, he orders Tyrone to take a breathalyser test.

Angry, Tyrone confronts Fiz and accuses her of trying to have him arrested to help her chances of getting custody.

But Evelyn warns Fiz there’s no winners in a custody battle.

4. Romance for Dev and Bernie?

Bernie manages to expose Evelyn’s scam. She tells Dev he owes her a drink.

When Aadi pokes fun at Dev’s non-existent love life, Bernie steps in and makes out they’re off for brunch.

Dev plays along and they have a pretend date. He suggests they go back to No.7 and continue the charade.

After, Dev tells Bernie she won’t be getting a repeat performance.

Bernie is gobsmacked by his arrogance and tells him not to flatter himself.

Later Aadi and Asha are horrified to realise their dad and Bernie are having some sort of relationship.

But when she overhears Dev laughing with Steve, making out he only copped off with Bernie because he was drunk, Mary is troubled.

5. Johnny puts the Rovers up for sale

Johnny decides he’s putting the Rovers up for sale and makes plans.

At a staff meeting, Jenny breaks the news to Emma and Sean that Johnny is selling the pub.

Later Daisy attempts to see off potential buyers and insists to Jenny they need to raise the money themselves to buy the pub,

Nina confides in Asha she can’t stop blaming herself for what happened to Seb.

Meanwhile Summer is struggling to eat and sleep.

Billy and Roy ask Nina to speak to Summer, but she ends up snapping at her, pointing out the extent of her own loss, leaving Summer feeling terrible.

Later Nina steps in the corner shop and steals a bottle of vodka when Dev isn’t looking.

She attempts to put things right with Summer and suggests they have a drink.

Clearly drunk, Nina cuts her hand and refuses help before heading out.

In the ginnel, Nina continues drinking to try and blot out the grief.

Leave us a comment on our Facebook page @EntertainmentDailyFix and let us know what you think of these Coronation Street spoilers.