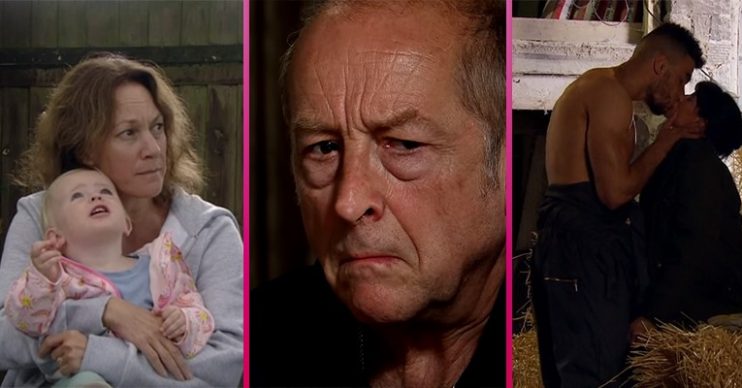 5 Soap storylines that viewers are getting annoyed with

Some of them have been going on for a while!

Soap storylines can be a divisive things, but what is going on in Emmerdale, Coronation Street and EastEnders that viewers are getting annoyed with at the moment?

For months Moira Dingle has been having an affair with farmhand Nate Robinson behind husband Cain Dingle’s back.

The pair have been sneaking around but they were recently caught out by Moira’s nephew Pete Barton.

Sick of having to share a house with Moira and Cain knowing the truth, he moved out and raised suspicion with Cain’s mother, Faith.

However, next week, it looks like the storyline will begin to draw to a close when Cain finds out the truth.

A dramatic showdown looks set to end with a boat explosion, but who will survive?

Although things look like they’re coming to an end, viewers have not been happy with the storyline.

An ED viewer wrote: “Too right. It’s getting boring.”

This Moira and Nate storyline is one of the worst ever. Nate is unlikeable and creepy. Moira has become an amoral selfish slut and there’s zero chemistry between them. #Emmerdale pic.twitter.com/NTbAp1kyfp

Getting bored of the Moira Nate storyline! #emmerdale

This moira and Nate storyline is irritating me #emmerdale

A couple of months ago, Kathy managed to get Rainie painkillers for her ribs, however, Rainie is an addict.

As soon as she began taking them, she began wanting them more and recently her addiction spiralled out of control.

She tried to take the pills behind boyfriend Stuart’s back and ended up buying them in the park whilst looking after baby Abi.

Getting bored of this Rainie drug storyline!

As she left Abi for a moment to take the pills, Stuart caught her.

He threw the pills in the dirt and took Abi home, leaving Rainie searching for them.

But when Rainie got back to Kathy’s, she called the police and once they turned up, she punched Kathy in the face in order to get arrested so she could get away from painkillers.

An ED reader wrote: “I’m sick to death of seeing this storyline, it’s been going on for weeks.”

Another said: “Hate the character, hate the story.”

Viewers have been getting fed up with Amy and Kerry.

Back in August, they accidentally started the fire at the Sharma & Sharma factory which killed Frank.

However as Frank had been sacked from the factory that day, villagers started to assume Frank caused the fire as revenge on his boss Jai for giving him the sack.

But it turned out that he was only in there to collect his belongings – which included an engagement ring for his girlfriend Megan.

Recently his daughter Tracy found out the truth about how the fire started leading to an altercation with the mother and daughter.

Kerry ended up hitting her head and Amy threatened to tell the police how Kerry got her injuries if Tracy told them about the fire.

Tracy decided she was going to tell the police, but when she heard teen Amelia say she couldn’t bear to lose Kerry, who was a mother figure to her, she decided against it.

Viewers are getting sick of the storyline going on and on. 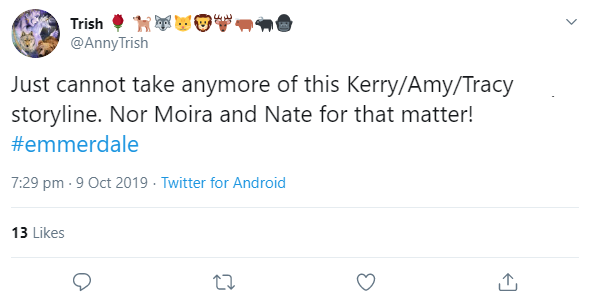 so just like Tracy, Vanessa isn't going to tell the cops about Amy & Kerry?
in that case I don't want to hear anymore about it.
sick of this storyline.#Emmerdale

One ED reader wrote: “This is boring, went on too long.”

Yasmeen has been a victim of Geoff’s coercive control for months.

The waiter has stolen and sold precious items behind her back, made out she puts him down and is horrible to him, and even set up a hidden camera in her house to keep an eye on her.

Recently he has stated he wants to be partner in the Speed Daal business much to the annoyance of Yasmeen’s granddaughter Alya.

Viewers have started to get bored of Geoff.

I’m not sure how long I can take this Geoff and Yasmeen storyline 😖 #Corrie pic.twitter.com/IGOxLJvuMw

Mandy and Vinny Dingle recently returned to Emmerdale village after a good nine months away.

Mandy returned to Emmerdale back in January bringing along her “son” Vinny.

Since their return they have been trying to get their hands on some cash.

Desperate to make some money, Mandy even resulted in pretended to be her cousin Sam’s girlfriend Lydia, in order to fleece her of money she was gifted.

But viewers haven’t been impressed with the storyline.

Oh no not another pathetic storyline in #Emmerdale?!?! Mandy making out she’s Lydia to get some money. Along with the ridiculous Moira/Nate – Kerry/Amy/Tracy it’s diabolical.

One ED reader wrote: “It’s the same old storylines over and over, getting a bit fed up. Who cares?”

Another wrote: “Don’t like what they have done to Mandy. Silly storylines.”