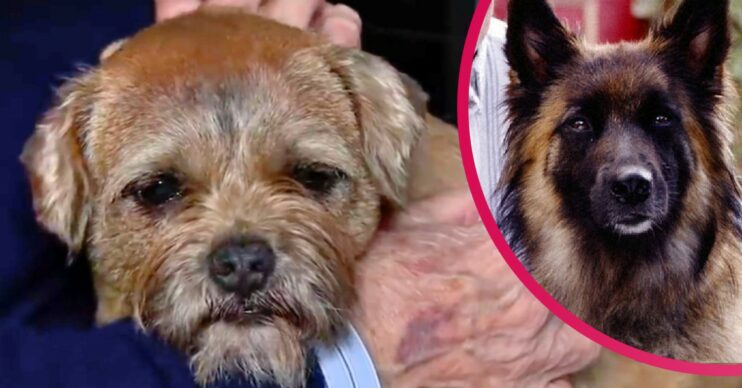 5 soap pets that really stole their scenes from Eccles to Ethel’s Willy!

And some were better actors than their human counterparts

Coronation Street has always been known for its cat in the opening titles – but it’s not the only pet in soap land.

Emmerdale has had its sheep, horses and cows and EastEnders has had more than its fair share of dogs.

But which soap pets really stole the show?

The nation didn’t know what a Belgian Shepherd was when Wellard burst onto their screens in 1994 but they soon fell in love.

Four dogs in total played Wellard – three of them related and all female – and he lasted until 2008 when he sadly died at the hands of Bianca Jackson.

He was the longest serving pet in EastEnders and he won awards.

And he bit Ian Beale so he was an excellent judge of character.

A magical dog for he is rarely ever seen – even when the family are turfed out of their home and moved into a hotel room.

David, named after David, was left to him by his owner Mrs Moss after years of giving her a blue rinse in the salon.

Initially David (the human) wasn’t going to keep him, but a £20k cheque soon changed his mind.

And the sweet little Yorkshire Terrier has provided some hilarious scenes ever since.

The Great Dane who quite literally destroyed part of the street.

He arrived on the cobbles after Mad Maya felt bad for kidnapping a greyhound and dropped him off at Tyrone Dobbs’ doorstep.

Hijinks ensued and he came into the care of Chesney Brown where he managed to collapse a bath through the floor.

He lived for seven years on the cobbles before succumbing to liver cancer in a heartbreaking goodbye.

Already about 150 in dog years when Blanche inherited her in 2006, Eccles was possibly the longest-lived dog in history.

She surpassed Blanche and Deirdre and spent 14 years living on the cobbles before soap bosses realised a Border Terrier probably should be dead already.

With Ken in Stillwaters, it was down to granddaughter Emma Brooker to make the difficult decision to put Eccles to sleep under vet advice.

It’s almost impossible to think of soap pets and not think of Ethel’s Willy.

The pug had viewers swooning throughout the eighties and nineties.

Read more: Emmerdale fans fear for Lydia as she ‘betrays’ the Dingle family

He appeared in the very first episode and lasted seven years until bosses axed him and put Willy to sleep.

Tragically the dog who played him died just weeks after being axed.