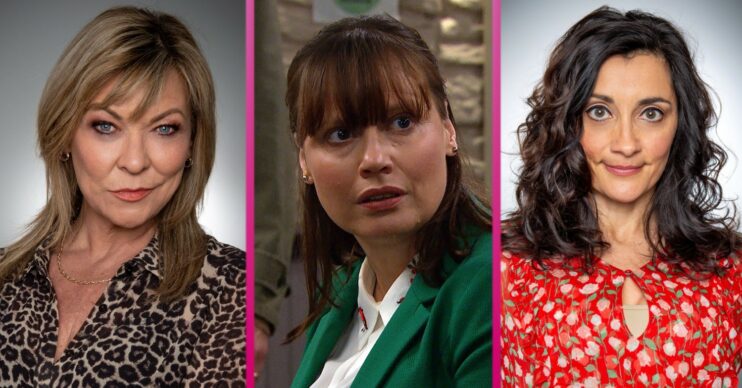 5 Emmerdale characters who can save the soap

The serial killer's exit leaves a lot of space to fill

Emmerdale is in need of more drama now Meena Jutla’s time in the village is coming to an end.

But instead of importing new characters – there are five already here that deserve a major storyline this year.

Obviously there is one true star of Emmerdale – Kim Tate.

She has been at the centre of the some of the most iconic moments in the soap’s 50 year history.

But not really lately. She’s been more a day player around other things.

It’s high time that Kim gets a fully thought out, long-running storyline of her own.

And what better time than now?

What do you get if you cross a frisky vicar with a terrible policewoman? Well you don’t get a storyline apparently.

The best you can hope for is to be locked in a basement for a month while you make up for covering up a killing.

But now we’re over that ridiculousness – it’s time for Harriet to shine.

Fight crime, have affairs, battle some major illness – anything that gives her screen time.

The shopaholic GP didn’t get the best welcome to the village after meeting Rishi Sharma.

But if we ignore her disappearing daughter, and failed marriage, and occasional inability to not buy everything, then Manpreet is one of the Dales’ biggest assets.

Smart but not scheming, powerful but not cruel – she is in every way the anti Kim Tate.

And as such she deserves to be at the centre of the show – especially when she deals with her killer sister Meena Jutla.

And then she got one kicking off with a brutal rape.

Admittedly that story went sideways when she fell for her rapist’s brother, who turned out to be gay, left her, she fell for the local shopkeeper and enraged his serial killer girlfriend before fleeing to Portugal for a long holiday.

But it has proved that Victoria is deserving of a major storyline.

One thing Emmerdale does not need is more Dingles.

The family have taken over the village in ways that wouldn’t be out of place in a war manual.

But Lydia is different. She’s different to the others.

She’s kind, compassionate, not a criminal etc. But she also can pull off a devastating story – if she’s allowed to.

And she should be allowed to.