EastEnders will soon welcome their Royal Highnesses Prince Charles and the Duchess of Cornwall to Walford.

The heir to the throne and his wife will make a special cameo in Albert Square for the Jubilee celebrations.

Before he was Prime Minister, Boris Johnson was at one point the Mayor of London.

And as such he was invited to appear in EastEnders Queen Vic for a special scene with the late Dame Barbara Windsor.

The 2009 scene saw Peggy promising to give him what for – before meeting him and promptly not doing that.

Instead she gushed: “It’s such an honour to have you here, Mr Mayor.”

“Oh please, call me Boris,” replied Boris before telling her: “If you have any ideas for how I could help Walford, here’s my card.”

“I wouldn’t dream of telling the Mayor of London what to do,” laughed Peggy.

The former football manager made his shock appearance on the soap after practically begging show bosses to make it happen.

He repeatedly spoke about his love for the soap publicly and eventually then-producer Jon Sen agreed.

Jon explained at the time: “What better way to mark a special summer for football fans by having none other than West Ham legend Harry Redknapp pay a visit to Walford?”

It’s not just royalty, politicians and footballers who turn up in Albert Square.

In 1995 pop star Robbie Williams made a cameo on EastEnders because he was such a big fan.

He was briefly seen in the background using the phone in The Queen Vic. 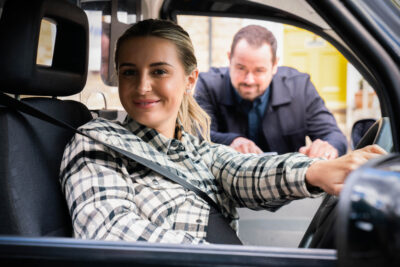 Read more: Is EastEnders being axed?

During the EastEnders filming restrictions caused by the pandemic, it was rare for cast members to be able to touch each other.

So when they needed a bit of human contact for Danny Dyer – bosses drafted in his daughter Dani to play a cab driver in need of his help.

The cute scene reunited father and daughter on-screen much to the delight of fans.