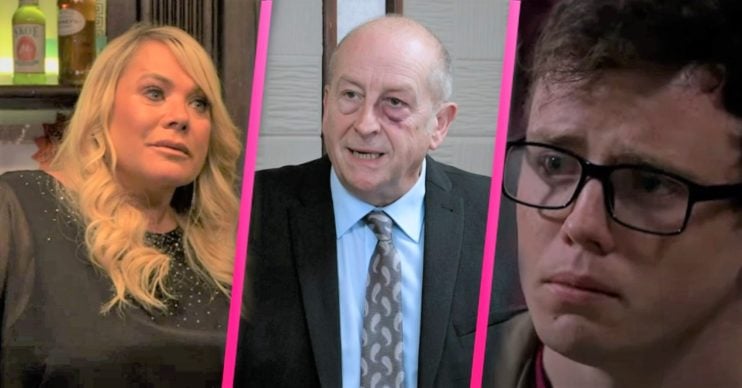 There were some brilliant moments in the soaps in 2020

In 2020 there have been many great soap moments that has left us shocked.

Whilst COVID-19 may have caused soaps to temporarily halt filming and come off air, it hasn’t stopped the shows from bringing us some amazing moments.

Here are some of the best moments from Coronation Street, EastEnders and Emmerdale in 2020.

Over the course of several months Yasmeen had been abused by her husband. He began controlling her by forcing her to clean, stopping her from working and taking control of her money.

However in May, Geoff threatened to kill Yasmeen. Fearing for her life, she smashed a bottle of wine over his head before stabbing him in the neck.

Before EastEnders went off air in June, viewers were left wondering who would buy The Queen Vic off Mick and Linda Carter.

It looked like Phil Mitchell was going to get his hands on the pub. However at the last minute, Mick sold the pub to Ian Beale and Phil’s estranged wife Sharon Watts.

In the final scene before the two month break, Sharon asked Phil if she wanted a drink whilst stood behind the bar.

Emmerdale – Vinny singing in the church

But Emmerdale viewers got to see the character Vinny belt out a tune earlier this year.

Vinny was roped into singing in the church choir only to reveal he has an amazing singing voice.

He sang Chesney Hawkes’ song The One and Only.

After Yasmeen was found not guilty of attempted murder, Geoff robbed her business Speed Daal.

But back at No.6, he set fire to Yasmeen’s house before chasing her onto the roof.

They were soon followed by Alya. But as Geoff went after his wife, he slipped down the roof.

Despite everything Geoff put her through, Yasmeen tried to help her abusive husband. But he ended up slipping and falling to his death.

For the soap’s 35th anniversary back in February, The Queen Vic had a party on the River Thames to celebrate winning Best London pub.

However, the party didn’t quite go to plan when Phil and Keanu got into a fight on the boat.

The boat ended up crashing and everyone on board had to evacuate. However, Linda was trapped in the kitchen on one of the boat’s lower decks.

Dennis Rickman Jr was also locked in one of the rooms on the boat’s lower deck.

While Mick managed to free Linda, Ian tried desperately to save Dennis as he was the one who locked him in the room.

Whilst Ian managed to get the teenager out of the room, a surge of water caused Dennis to drown.

As soap fans know, Emmerdale, Coronation Street, EastEnders and Hollyoaks all had to halt filming during the first UK lockdown.

There were six episodes in total.

The two and three-hander episodes were unique, but also very entertaining.

Viewers got to learn more about the backstories of characters like Al and Mandy.

Recently, Coronation Street celebrated its 60th anniversary. And like with any big soap anniversary, there was plenty of drama and mystery.

In the final episode of the anniversary week, Adam Barlow was attacked by an unseen assailant.

In the week leading up to his attack, Adam had made many enemies on the cobbles.

His uncle Peter discovered Adam had slept with his girlfriend Carla. Adam’s wife Sarah also discovered this and was devastated.

Whilst we still don’t know who attacked Adam, it definitely was a move viewers didn’t see coming!

Viewers knew Al had been cheating on his girlfriend Priya for months. But the identity of his other woman remained a mystery.

However on Christmas Day, Debbie Dingle made her return to the village after over a year away. And it was revealed she is Al’s mystery woman.

But currently, neither Debbie or Priya know about Al’s cheating.

What was your favourite soap moment in 2020? Leave us a comment on our Facebook page @EntertainmentDailyFix and let us know what you think!