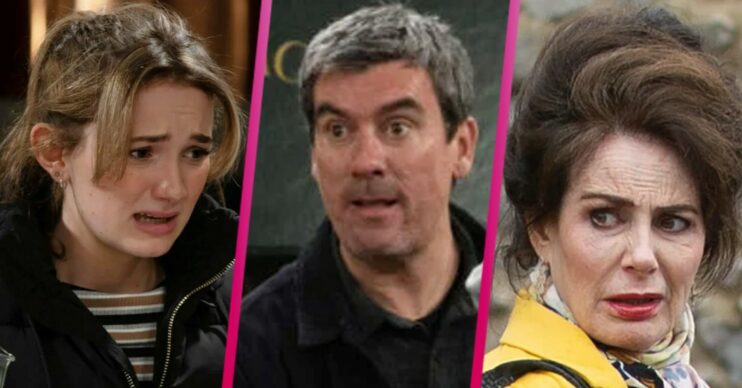 13 Emmerdale spoilers including gun terror, kidnap horror and a death?

Who will make it out of next week alive?

Noah makes a dangerous move with Chloe that could end in horror for Charity.

Cain, meanwhile, is not giving up his vendetta against Al.

And Gabby is sure Jamie is back in the village to kidnap her son.

All this and more in next week’s dramatic Emmerdale spoilers.

A flashforward begins this week of Emmerdale spoilers and we see a misty graveyard with an open grave.

But who has dug it? And who is it for?

A police cell door slams shut, but who has been put in jail?

There’s a gunshot heard in the woods.

A steaming car is crumpled up and it’s clear someone’s had a terrible accident.

Jacob has been framed by Noah for stalking Chloe.

He desperately tries to get someone, anyone, to hear him out as he insists he didn’t steal her keys or journal.

Victoria listens to his case and he tells her he thinks Noah is behind it all. But will she believe him?

5. Chloe finds out the truth

Chloe spends the day with Noah hanging out at his place. After Nate blew her out, Noah’s attentiveness is quite flattering and Chloe is lapping it up.

However, when she finds her lost keys, she realises something is amiss.

Noah bluffs his way out of it, but a panicked Chloe guesses what’s been going on all along.

She sends Noah out for snacks as she begins to search his laptop for evidence. It’s not long before she finds out he’s been stalking her for weeks…

Chloe is frosty when Noah returns with all her favourite snacks.

She immediately confronts him and he reacts badly. Chloe tries to leave with his laptop, but he blocks her way.

As he tries to trap Chloe in the house, will she get away?

She is stunned to see the terrifying scene in front of her.

Will appalled Charity be able to stop Noah before it’s too late?

Gabby is frightened Jamie is coming back to snatch Thomas.

Dawn tries to reassure her, but then admits there was a hooded person on the CCTV.

Making it her mission to keep an eye on everything and everyone, Gabby soon finds a dropped torch.

She checks the CCTV and sees the hooded figure for herself – is it Jamie lurking in the woods?

Meanwhile she gets back home and finds a gift left for Thomas. She goes cold as she knows it’s very definitely been left by Jamie…

The gun cupboard is broken into at Home Farm.

A hand reaches in and takes a shotgun. Whoever is stalking Gabby is now armed.

What will they do next?

Al is sure Cain is trying to kill him again when he suspects the mechanic has sabotaged his car.

He demands Cain prove it’s safe by driving it himself, which Cain agrees to do.

Cain gets behind the wheel and roars the vehicle down Main Street, straight towards a defiant Al.

Neither looks set to move, but it’s Cain who screeches to a halt in the nick of time.

However, is this really over?

12. Faith tries to make up with Cain

Desperate to have her family around her, Faith tries to make amends with Cain, but he unleashes a torrent of abuse at her.

Even Chas tells her she wants nothing to do with her any more.

Desperate to get somewhere fast, Faith is frustrated when the bus doesn’t turn up. She picks a fight with Amelia in the street, offending her.

Making things even worse, Faith picks up a dumbbell and throws it through the window of Dan’s door.

Moira is appalled to witness the scene, but what is really going on here?

What is wrong with Faith?