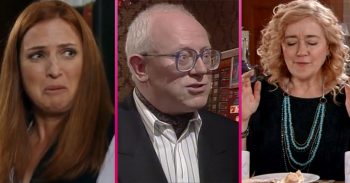 Coronation Street often does a fine job of reflecting our everyday lives. There are times though when it gives us the extraordinary instead.

Butchers who repeat themselves. Teachers who will literally kill to get a job. Clairvoyants who are in touch with the ghosts of Corrie past.

One of the great joys of the show is watching how these mavericks fit into Street life. Some are fleeting, others are here for years.

Here’s a round-up of our personal favourites.

“I’m not a psycho! I’m just a man who loves his wife and children.” Richard Hillman didn’t take kindly to being called ‘Norman Bates with a briefcase’ by Gail but she was spot on.

When the smoothie financial adviser first sidled up to Gail at Alma Halliwell’s funeral claiming to be Alma’s cousin Corrie fans had no idea what was in store.

By the time he whacked second wife Patricia with a shovel and pulverised Maxine Peacock and Emily Bishop with a crowbar it was a whole different kettle of fish.

The Hillman screaming “I love you” as he plunged the Platts into Weatherfield canal to the sound of The Wannadies is as fantastically bonkers as it gets.

First played by Emma Collinge as a child, Rosie Webster became the unique creation she is today when Helen Flanagan took over in 2000 and Corrie writers saw her true potential.

Whilst most Corrie kids can barely make it to Rosamund Street, Rosie lives in a parallel universe, modelling in Miami, being interviewed by Phil and Holly on This Morning and currently as the assistant on a TV Japanese game show.

Only Rosie could explain, in all seriousness, that she is incapable of remembering the words ‘inconvenient’ or ‘envelope.’

She is also the only character who could say to Holly Willoughby: “I know you’re a style icon for older mums, but I would totally wear most of your clothes.” A total one-off.

A jiggle of those Timmy Mallet-style glasses and an attitude that’s part mini-dictator, part Toad of Toad Hall and you have one of the Street’s greatest buffoons.

Bettabuys’ manager Reg was vain, pompous and utterly deluded when it came to the ladies. He thought he was Cary Grant, they thought he was a prize idiot.

All, that is, except Maureen Naylor (Sherrrie Hewson) who married Reg and only finally saw the light when he cheated on her with his mistress in Lowestoft.

Reg’s other comedy partner-in-crime was his employee Curly Watts. Weatherfield’s Laurel and Hardy for the Nineties there was no greater sight than the pair of them going wild in the aisles.

Mary Cole nee Taylor is one of those beguiling Corrie characters who started big and then unexpectedly hit us with something devastating and real.

In her early days as a competitions obsessive Mary was off the scale when it came to her larger than life tales of childhood and her domineering mother, Maureen.

Mary told us all sorts. She’s a sucker for the smell of Weetabix, a collector of sea shells – her pink slit conch was very much admired. And she has the constitution of a shire horse.

It was when she bravely revealed that she had been raped while working as a nanny that we discovered a new courageous side to Mary that has totally grounded her since.

The self-dubbed B-Pack aka Bessie Street School’s former headteacher, Brian Packham likes to think he’s down with the kids. Quite the opposite was true when it came to last year’s Nativity play.

Brian has all the foolish pomposity of a Reg Holdsworth, ready to be literally brought crashing back to down earth, but there is also a sweetness to him.

Being picked on by bully Phil revealed a genuine vulnerability to Brian and made his relationship with current beau Cathy feel deeper than his chaotic first romance with Julie Carp.

The accidental serial killer, teacher John Stape never meant to hurt anyone but somehow the body count started stacking up after he slept with Rosie Webster.

Ex-colleague Colin Fishwick died of natural causes but when John stole Colin’s identity so he could teach again it all started getting very complicated.

He disposed of another work colleague, Charlotte Hoyle, with a hammer when she was about to reveal his secrets to true love Fiz and also killed Colin’s mum Joy trying to shush her.

By the time he leapt from the roof of Weatherfield General and somehow miraculously survived, Michael Myers-style, John had entered the realms of fantasy. Then he died of a heart attack.

Louiza Patikas was brought in by previous Corrie show-runner Kate Oates, who had worked with her on The Archers, and the casting has been a stroke of genius.

Moira could hold her own in a Carry On movie knocking back the sherry and asking Eileen if her breasts are tender.

Her finest hour was drunk at Eileen’s house party for Pat when she shared the local gossip with its subjects. “And you are the one that everybody hates!” was her sign off to Tracy.

Bogus clairvoyant Rosemary arrived in memorable fashion at the salon saying she had been recommended by Mrs Abercrombie, a long-dead regular who perished from swallowing a chocolate egg in one bite.

Despite Audrey’s suspicions Rosemary managed to dupe Gail into believing she was being haunted by the ghost of Richard Hillman.

Equally dismissive was Roy who was appalled by Rosemary’s macabre and sick séance when she pretended to be talking to Hayley and Alma.

In the end she was unmasked as being in cahoots with Lewis Archer and fittingly Royston saw her off – but not before Four Weddings star Sophie had wrung every delicious drop out of her.

Master Butcher Fred Elliott, a man capable of polishing off a family size ice cream tub in one sitting, first made his presence known when he tried to bribe the judges at a black pudding contest in France.

His finest hour was the dramatic Bettabuys siege which Fred managed to turn into a glorified barbecue as he played for time with the two gunmen.

His methods were unorthodox but they were enough to get him and estranged son Ashley Peacock out in one piece.

Local undertaker Archie Shuttleworth became a romantic interest for Blanche Hunt after she complained at a funeral that one of his pallbearers had been chewing gum.

There was something of the old music hall about Archie as he serenaded Blanche outside The Rovers with a bouquet and hearse.

Unfortunately, Archie had a roving eye for Audrey. Blanche chucked a drink over him and that was that.

He recently came back from the dead when he left Audrey £80,000 before grandson Nick made off with it.

How could a Corrie character played by Vic Reeves aka Jim Moir not be larger than life? Newsagent Colin Callen was the sponsor behind the Mr & Mrs competition that Mary and Norris entered.

They didn’t win but Colin kept us entertained for 20 episodes as he made a move on The Kabin and Rita’s flat, fell for the “luminous, loyal, pre-Raphaelite” Moira Pollock and convinced himself that Norris was his dad.

When he persuaded Moira to nick a sample of Norris’s blood and she got the sack the pair headed off to Stoke-on-Trent.

Sadly it was not a happy ending for Colin as Moira revealed on her return referring to #colinlyingcheatingwretchgate. As he would say, “Fate 2. Colin 0.”

What could be more delicious than a genuine acting knight gracing the cobbles?

Sir Ian McKellen revelled in his 10 episodes in 2005 as the enigmatic Mel Hutchwright, author of bodice ripping novel Hard Grinding.

Mel was finally unmasked as crowd funding conman Lionel Hipkis but everyone was too embarrassed to shop him so Lionel legged it.

Who is your favourite larger than life Corrie character? Leave us a comment on our Facebook page @EntertainmentDailyFix and let us know what you think.