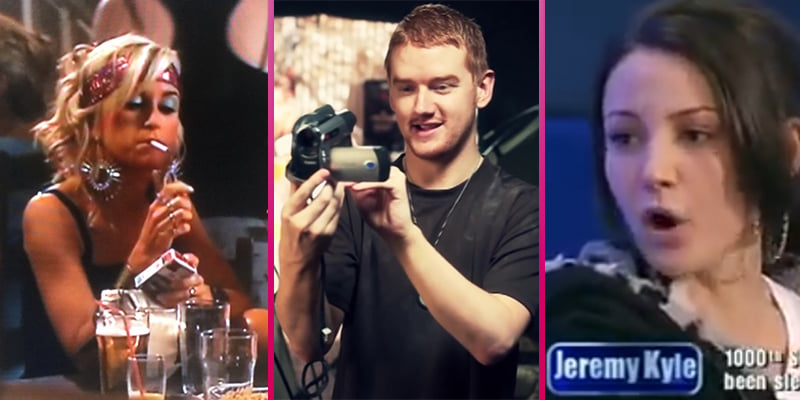 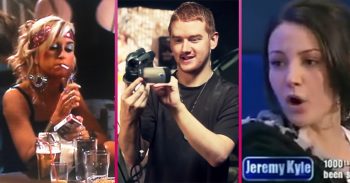 Since then they have come in all shapes and sizes. From full-length straight-to-VHS features in the 90s, to 21st Century online supplements to major storylines.

Some are funny, some are moving, others are just plain surreal (yes, we’re looking at you, Dickie the boatman, aka Brian Capron aka Richard Hillman).

And who can resist a returning character wherever they might pop up again?

Once she’d recovered from the shock of her terminal cancer diagnosis, Hayley Cropper decided to deal with it in typically proactive fashion by creating a bucket list of video diaries.

Naturally Roy is with her every step of the way. He helps her conquer her pupaphobia (fear of puppets) which had been brought on by a childhood Punch & Judy Show in Morecambe.

They go boating, revisiting their first date, and camp out under the stars, which is actually Anna Windass’ back garden.

Naturally the last video entry is for their never-to-be-forgotten trip to Blackpool. Bucket list complete and memories stored, Hayley is ready for her final chapter.

The programme begins with a classic Kyle question: ‘Has my brother been sleeping with my ex?’ Except on this special 1000th anniversary it’s David Platt asking it.

Getting David (Jack P Shepherd), Nick (Ben Price) and Tina (Michelle Keegan) on the show, all in character, all playing it dead straight was inspired.

The Keegan gives it full emotional waterworks, Jack P delivers David’s classic death stare and the appearance of jealous Graeme Proctor (Craig Gazey) in the studio audience is the cherry on top.

When Nick’s lie detector results come back and a brilliantly deadpan Jeremy reads them out you can hear a pin drop. “David, he was telling the truth.”

After coping with the non-stop drama of offspring Tracy and Peter in regular Corrie, what better way for Ken and Deirdre to put a lid on their day than tucked up in bed with Hilary Mantel and the shopping channel.

Perfectly played by William Roache and the late great Anne Kirkbride, Bedtime Stories, written by Jonathan Harvey, was a 2011 Valentine’s Day online gift for fans which stretched to 10 episodes.

Whilst Ken does his best to focus on Wolf Hall, Deirdre, in sexy spex and face mask, debates purchasing a lazy Susan and constantly checks if Ken has put the bins out.

Tender and funny it also gives us the remarkable sight of Ken reluctantly putting on a bra stuffed with tennis balls – Deirdre’s anti-snoring device for when he’s dreaming of Penelope Keith.

For the show’s 35th anniversary there was an upgrade from street to ocean liner for Rita and Mavis and newly-weds Curly and Raquel plus a guest return visit from Alec Gilroy as the QE2’s ship’s entertainer.

The honeymoon is short-lived when Raquel confesses she slept with Des Barnes but Curly draws a line under it and they renew their vows.

Mavis takes to the dancefloor for a tango with lothario Henri de Vence (Nicky Henson) who marvels at “zis ‘umble life you ‘ave” while Mavis pines for husband Derek.

Best of all Miss Rita Littlewood deputises for the on-cruise cabaret giving us a gorgeous Embraceable You.

Jack and Vera are meant to be celebrating their Ruby wedding: “I look at you Vera, love, and I see all them 40 years. Every single one of them.”

Except it turns out they’re not properly married because Jack added two years to his age when he first courted Vera Burton and it’s on the marriage certificate.

Tracy Shaw as Maxine Heavey and Angela Griffin as Fiona Middleton are along for the caper but it’s Vera and Jack’s show, even when Joan Collins puts in a guest appearance.

An invitation to Frankie Baldwin’s wedding in Romania is more appealing to Hayley Cropper than to Roy: “We’ll leave a carbon footprint the size of a Yeti.”

An electrical storm over Stuttgart puts paid to that but they end up house-sitting for the newly-weds and are joined by their alleged Uncle Glen and Aunty Verity, guest stars John Henshaw and Siobhan Finneran.

Things really liven up midway with the arrival of Becky McDonald – “Royston!” – who has got the hump with Steve.

Highlights are ABBA karaoke and Roy in a jacuzzi. As he puts it: “I will now have some empathy with my next boiled egg.”

“It’s sort of like June in Weatherfield but with more flies.” Gary Windass does his best to paint a reassuring picture with his video diary for mum and dad Anna and Eddie back home.

Gary’s first tour of duty of Afghanistan is alongside best pal Quinny (Steve Bell). There’s plenty of good-natured in camp banter as they deliver post to the troops but we all know what’s coming.

A passing encounter with a boy and a goat proves harmless first time round but the next time is devastating.

Quinny dies saving his mate and only later does Gary discover his heartbreaking video message: “When Quinny’s got your back, you’re safe as houses.”

Read more: Why Gary is still having a tough time on the Street – with Corrie fans

Norris is not impressed when Mary tells him they’ve won a luxury medieval themed weekend at Tatlock Towers.

Rita points out that although he may hate the commercialisation of history he can have a lovely time sneering at all the other guests.

It’s actually an elaborate (and unsuccessful) ruse by Lady Mary to have her wicked way with Prince Norris. For fans there’s a guest reunion of the old double act of Reg Holdsworth and Curly Watts as function organisers.

More dubious is Jeremy Edwards as plastic surgeon Uri tying up Rosie Webster in her underwear to inject “powerful toxins” into her face. Luckily Jason Grimshaw saves the day.

Who else but Norris Cole could play Dickens’ Scrooge? Malcolm Hebden lays on full Ebeneezer as he makes Rita and Dennis work late on Christmas Eve.

Norris is visited by an impressive array of ghosts from the show’s past. Mike Baldwin, Maxine Peacock, Derek Wilton and Vera Duckworth.

“Has the penny not dropped yet?” says Vera as Norris asks who the party is being thrown for in The Rovers.

It’s his wake. Little Mix are singing and Rita has broken a heel from dancing on his grave. The two eight minute bundles of joy were produced by later Corrie showrunner Kate Oates.

Rosie Webster lifts the lid on the dark side of the fashion industry with this searing investigation.

Well, not quite. There’s some bitching about Rosie’s “cottage cheese legs” by her modelling rival Stacey and a sleazy agent who is cheating on his girlfriend.

Mostly though it’s Rosie duking it out on breakfast telly with Stacey, going viral and being invited on Loose Women.

As Andrea McLean introduces her, “A young woman who recently demonstrated her competitive spirit when she was modelling – or not – on Lorraine.”

“Is the she the one under the umbrella-ella-ella?” Sally Metcalfe might not know who Cheryl is but the rest of The Rovers were delighted to see Chezza.

In this charity special Cheryl is old mates with Tina McIntyre from the time Tina’s family caravanned next to The Tweedys in Skegness.

Landlord Steve won’t give Tina the day off to go party in Newcastle so Cheryl places an ad in The Kabin window for a new best friend.

Sinead, Dev, Sophie and Kirk all put themselves forward but in the end there can only be one winner: Norris Cole.

Is your favourite Corrie spin-off included? Leave us a comment on our Facebook page @EntertainmentDailyFix and let us know what you think.