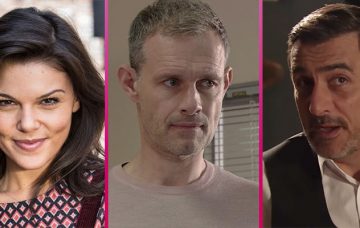 11 Coronation Street characters who could not stay faithful

Coronation Street is a hotbed of romance and illicit affairs and there are just some characters who cannot stay faithful no matter how hard they try.

When you look at the list of current Street residents who just can’t stick to the one they’re with, there are at least 11 characters from the cast of Coronation Street who’ve been unable to stop themselves having an affair.

With Tim Metcalfe and Kate Connor the latest to cheat on their partners, is no weatherfield relationship sacred?

He cheated on his first wife Valerie Tatlock with exotic dancer Pip Mistral and reporter Jackie Marsh, was cheated on by second wife Deirdre Barlow with Mike Baldwin, and then cheated on Deirdre with Wendy Crozier.

And then in 2009, he struck up a relationship with Martha Fraser, while still married to Deirdre.

He became the ultimate cheater, in fact, when he married Shelley Unwin while also married to Lucy Richards – and fathered a son with Lucy too.

He then married Leanne Battersby on what was supposedly his deathbed in 2010. Peter survived and went on to cheat on Leanne with Carla Connor. After leaving Leanne and marrying Carla, Peter cheated on her with Tina McIntyre.

It must run in the family as Tracy Barlow is also known for being a cheat.

Trace has done the dirty many times, most notably after she married Robert Preston in 1996 and cheated on him in 2002.

But her forte is really stealing other people’s men – she took Steve McDonald from Karen McDonald, and Becky McDonald, and she stole Tony Stewart from Liz McDonald.

Kevin married the then Sally Seddon in 1986, but began cheating on her with Natalie Horrocks 10 years later. They reconciled then divorced, then reconciled and remarried.

But Kev couldn’t keep his hands to himself and cheated again in 2009 with Tyrone Dobbs’ wife Molly. The pair had son, Jack.

Sally Metcalfe is currently in prison for defrauding the council of £40,000, which she didn’t do, but the whole case hung on her supposed affair with Duncan Radfield. On this occasion she didn’t actually cheat on husband Tim, but given her past history, you’d be forgiven for not believing her.

She had an affair when married to Kevin Webster in 1999 with Greg Kelly which resulted in the end of Sal and Kev’s marriage. She then got engaged to Danny Hargreaves, but slept with Kevin, who she then remarried in 2001.

Sal started a job at a car garage and began an affair with her boss, Ian Davenport, and after that ended, tried to start an affair with John Stape, who was sleeping with her daughter at the time.

Steve McDonald just can’t seem to stop his wandering eye. He was with Michelle Connor, but cheated with Becky McDonald, he then cheated on Michelle again after they reunited, with Leanne Battersby, fathering a child with her.

Tracy Barlow finally got her man after years of chasing Steve, but he cheated on her by sleeping with Leanne just before their wedding, after wrongly believing Trace had given him a free pass.

On the face of it, Nick’s been the wronged man many a time – Leanne Battersby cheated with Peter Barlow and Carla Connor cheated with Robert Preston. But, when you dig a little deeper, Nick’s also a bit of a cheater.

He dated Maria Connor back in 2002, but already had a girlfriend in Canada, he seduced Leanne out of her marriage to Peter, he slept with brother David’s wife, Kylie Platt, and when he returned to Weatherfield earlier in 2018, he started up a relationship with Leanne (again) despite already having a wife, Elsa, in Nottingham. Not such a wronged guy now, eh?

Johnny Connor was never too sure about his relationship with Jenny Bradley, but things went full steam ahead after they got back together following his MS diagnosis.

But it was always clear his friendship with Liz McDonald was more than that and they eventually slept together after his son, Aidan’s funeral.

He’s back with Jenny now, but she knows the truth and her jealousy over Liz might just be pushing the pair back together…

Cheating really does run in the family! Kate Connor arrived in Weatherfield engaged to Caz Hammond, but promptly kissed Sophie Webster behind her fiancée’s back.

She was then in a relationship with Sophie, but actually getting it on with married Rana Nazir, and when she and Rana finally left their other halves and went public, Kate decided she wanted a baby by any means possible – even cheating with Adam Barlow just to get pregnant.

Although he hasn’t done the dirty on wife Sally quite yet, Christmas 2018 sees Tim sleep with his sister-in-law Gina Seddon.

Okay, so he believes Sally cheated on him with Duncan, but that doesn’t excuse his cheating ways.

Gary Windass is generally a pretty faithful guy, but he tried to kiss Tina McIntyre when she was a surrogate for Gary and then-girlfriend, Izzy Armstrong.

And more recently, he had a one-night stand with Nicola Rubenstein while with Sarah Platt and – surprise, surprise – fathered a baby with Nicola.