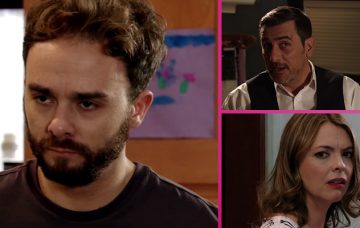 11 characters who have grown up on Coronation Street

Who still lives on the street where they grew up?

During Coronation Street’s 58 years on screen there have been 44 births.

And some of those have grown up living on the Street.

Which characters have lived their childhoods, teen years and now adulthood in Weatherfield? Here’s who’s never been able to get away from their roots…

Waistcoat-wearing Peter is a recovering alcoholic, a bigamist, and has been married five times. He has one son of his own, Simon Barlow, and despite leaving the Street several times, has never been able to stay away.

He’s currently skirting round his ex-wife Carla Connor and as the two look set for a reunion, it looks like Peter’s sticking around in Weatherfield this time.

Tracy McDonald was born January 24, 1977 to Deirdre and Ray Langton, although she soon changed her name to Tracy Barlow when Deirdre’s new husband, Ken Barlow, adopted her.

Trace, played by Dawn Acton, spent much of her youth in her bedroom playing tapes, but when she came down she was a troubled teen who played truant.

She left for London in 1996 after marrying Robert Preston, but returned claiming he’d cheated on her in 2002 – and that was the start of the Tracy we now know and love.

Now played by Kate Ford, Tracy is the queen of lying and manipulation. She convinced Roy Cropper he’d slept with her and was the father of her daughter, she ruined Steve McDonald’s many marriages, and she even committed murder when she killed cheating boyfriend Charlie Stubbs.

She’s now happily married to Steve, but for how long?

Born on December 31, 1980, Nick Tilsley is the son of Gail Rodwell and the late Brian Tilsley.

Nick’s birth was fairly uneventful – it even happened off screen and he wasn’t seen until five days later!

But life since hasn’t been quite so dull. He’s been married four times (twice to Leanne Battersby), been owner of the factory, the Bistro, and then the factory again, suffered brain damage after his brother, David’s revenge plot caused him to crash his car, and left to start a new life a couple of times – only to return months down the line.

Sarah-Louise Tilsley was born February 2, 1987 to Gail and Brian Tilsley. But after Brian died, Gail’s new husband Martin Platt adopted her and she became Sarah Platt.

She was part of one of the show’s most controversial plots in 2000 when she discovered she was five months pregnant just after her 13th birthday. She gave birth to Bethany Platt, before falling pregnant again when she was 16 with Todd Grimshaw’s baby, who died after being born prematurely.

When Sarah returned to the Street in 2015 she began a relationship with sister-in-law Kylie Platt’s evil ex, Callum, and after he was killed by Kylie when he tried to attack Sarah, Sarah discovered she was carrying his baby. Harry was born in March 2016 and Sarah suffered postpartum psychosis.

She’s now in a relationship with Gary Windass, but he’s fathered a baby with Nicola Rubenstein and Sarah is struggling with his devotion to baby Zach.

The first daughter of Kevin Webster and Sally Metcalfe, Rosie was born one day before David Platt on December 24, 1990.

Only two actresses have played Rosie – Emma Collinge from 1990 to 1999 and Helen Flanagan from 1999 to the present day. Helen left the Street in 2012, but returned in 2017, although she’s currently on maternity leave with her second child.

Rosie has always been Sally’s prodigal daughter – receiving special treatment, being sent to private school and getting all of Sal’s attention – something that didn’t go unnoticed.

She’s had a goth phase and an affair with her married teacher John Stape, who subsequently kidnapped her as he blamed her for ruining his life. And despite a serious relationship with Jason Grimshaw she eventually left him to pursue her modelling dreams in London and LA – although she returned with her tail between her legs after getting involved in something dodgy while she was away.

Born On Christmas Day 1990, David Platt is the son of Gail and Martin Platt and brother of Nick Tilsley and Sarah Platt.

He’s had his troubles during his time on the Street, going from cheeky youngster to nine-year-old shoplifter. It was all downhill from there as David rebelled big time following his near-death experience at the hands of Richard Hillman.

He terrorised his mum, even pushing her down the stairs, and only settled down when he married Kylie. But when she slept with his brother, David went off the rails again and caused Nick to crash his car, leaving him brain damaged.

David settled down again, reuniting with Kylie, but their happiness was brutally cut short when she was murdered by Clayton Hibbs – whose mother, Shona, David is now dating.

He is currently dealing with the aftermath of being raped by supposed friend Josh Tucker and looks set to be on the Street for at least another year after signing a reported mega-bucks deal to lock him in until 2019.

Sophie’s always been overshadowed by Rosie, but that changed when Sophie embarked on a relationship with her best friend, Sian Powers. Sophie eventually came out as a lesbian and has since had romances with the late Maddie Heath, Kate Connor and Paula Cunliffe.

Despite Sal’s obvious preference for Rosie, Sophie’s always looked out for her mum and is continuing to fight her corner following Sally’s imprisonment for false money laundering charges.

He might not have been born on our screens, but boy, has Chesney Brown grown up on them.

He first arrived with mother Cilla Battersby-Brown in 2003 when Ches was nine-years-old and adorable. While Cilla’s departed, Chesney has stuck around and is now a dad himself to Joseph.

But perhaps his most memorable relationship was with his beloved dog, Schmeichel.

Chesney currently works in the kebab shop and is caught between two women: Gemma Winter and Emma Brooker.

Bethany Platt was born to Sarah Platt on June 4, 2000 after her 13-year-old mum fell pregnant to her classmate Neil Fearns.

Bethany’s biggest storyline in her childhood came when she took ecstasy tablets that her uncle David hid in a toy. After a huge family fallout, Bethany and her mother departed for Milan, but returned in 2015.

Feeling increasingly distant from her family, Bethany fell prey to groomer Nathan Curtis in 2016 and throughout 2017 was subjected to a horrifying ordeal of being raped by his friends. She eventually realised Nathan didn’t love her, and she found the strength to testify against him in court, seeing him sent down for his evil crimes.

Simon Barlow was born July 4, 2003 to Peter Barlow and wife Lucy Barlow. He didn’t have the best start in life given his parents weren’t together as Peter had also married Shelley Unwin and committed bigamy. Then Lucy died of cancer when Simon was only five and he came to live with his alcoholic father.

Things became a bit more stable when Peter’s then-wife Leanne adopted Simon, but when Peter cheated with Carla it all went wrong again. Peter ended up leaving and Simon stayed with Leanne, but all the trauma (and more besides) caused Simon to start being violent with his stepmum.

He eventually got help for his anger issues, but then became involved with a gang. Realising the error of his ways, he’s been trying to get away from the bad boys, but that’s easier said than done…

Amy Barlow, born February 9, 2004, was originally brought up by Hayley and Roy Cropper after mother Tracy convinced Roy they’d slept together. But it turned out Steve McDonald was actually Amy’s dad.

With a mum like Tracy, it’s no wonder Amy’s more than a little rebellious. She was a suspect in the who pushed Ken saga, and has teamed up with her cousin, Adam Barlow, to cause trouble on more than one occasion.

Her biggest storyline is set to come next year when it’s reported Amy will fall pregnant  at just 14.