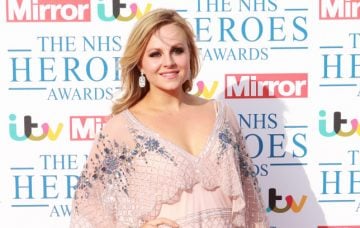 She has played Sarah for a long time

Tina is best known for her role as Sarah Platt in Coronation Street.

The actress has been involved in many hard-hitting storylines during her time on the cobbles including teenage pregnancy, and her daughter being groomed by a paedophile ring.

Here are 10 facts about the soap actress.

Tina recently got married to her fiancé Adam Crofts.

The couple met at a coffee shop when her daughter Scarlett ran over to chat with him. The pair have a son together, named Beau, who was born in 2014.

The couple got married on New Years Eve 2018.

2. Tina is good friends with her ex, Ryan Thomas

Tina began dating her co-star Ryan Thomas who played Jason Grimshaw in the soap in 2003.

The pair dated until 2009 and have a daughter together named Scarlett, who was born in 2008.

He also added: “As a stepfather in Scarlett’s life, I’ve hit the jackpot. She adores him.”

2. Tina has been on Coronation Street for nearly twenty years

Tina joined Coronation Street in 1999 and played Sarah until 2007 when her alter-ego left the cobbles for a life in Milan with her daughter Bethany.

However, she returned in 2015 after Bethany ran away from home and back to Coronation Street.

Sarah was originally played by twins Leah and Lynsay King. Sadly Leah passed away when she was six months old due to cot death.

Her sister Lynsay continued to play Sarah up until 1999 when Tina took over the role.

Lynsay appeared in the 2004 documentary called The Kids from Coronation Street where she admitted she quit the role after she was bullied at school for her part in show.

Tina has had many other acting roles.

Between 2010 and 2011 she played the daughter of head teacher Karen Fisher in BBC’s Waterloo Road. Her character, Bex, returned home after going missing two years previously. She went back to school, but her past soon followed her.

6. She played Jack P. Shepherd’s sister in another show

Jack plays Sarah’s brother David Platt in the ITV soap but the pair played brother and sister before they were cast as the Corrie siblings.

Jack played her brother in a series called Clocking Off back in 1999. He was Charlie Kolakowski in one episode of the series called Yvonne’s story, while Tina played his sister Adele.

6. Tina suffered with postnatal depression after the birth of her daughter

Tina shared an Instagram post in January this year where she revealed she suffered with postnatal depression after Scarlett was born.

The actress admitted her life was “pretty dark” for “a little while” after having her daughter 10 years ago, and she feels “so sad” reminiscing about how tough things were post-birth.

In 2000 Sarah found out she was pregnant at just thirteen years old.

Sarah was the youngest in the soap to have a baby until Faye Windass fell pregnant at age 12 in 2014.

In the documentary Gail and Me: 40 years on Coronation Street Tina said: “Looking back, that was huge it was absolutely humongous.”

She then went on to say: “There was nowhere in the country that I would go without being recognised and people coming up to me, and I had a lot of mail from young girls who were in similar situations.”

Helen Worth who played Sarah’s mother Gail said: “All those scenes we worked together so closely on and yeah I think Tina, I think of as my little girl really.”

8. Tina is the godmother of the original Bethany Platt

Tina is godmother to Emily Walton. Emily and her twin sister Amy played Bethany Platt from 2000-2007 until the character Bethany left with her mother Sarah.

The twins are now 18 and gave up acting after their stint on the soap.

9. Tina was on Strictly Come Dancing

The soap star was on series eight of Strictly in 2010.

She was partnered with professional Jared Murillo and was elimated in the fifth week of the competition.

10. Tina runs her own drama school for children

In 2013, Tina opened a drama school for children in Manchester, called The Drama Mob.

Tina teaches classes at The Drama Mob and the school represents children who play regular characters in Coronation Street and Hollyoaks.

Freddie and Isaac Rhodes, who play Tina’s on-screen son Harry are a part of The Drama Mob along with Emmanuel and Jeremiah Cheetham, who play Oliver Battersby in Corrie.

Are you a fan of Tina? Leave us a comment on our Facebook page @EntertainmentDailyFix and let us know what you think of this story.