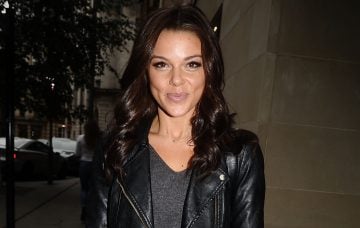 We take a look at the lady behind Weatherfield's Kate Connor...

ALL YOU NEED TO KNOW ABOUT FAYE BROOKES

Since arriving in Weatherfield, Kate has been at the centre of many dramas, including the shock death of her brother Aidan, who took his own life, and her engagement to unhinged former soldier Caz Hammond.

However, it was Kate’s sizzling romance with Rana that really caught the imagination of soap fans. Soon the pair became one of the most popular couplings on the Street, with ‘Kana’ fans up and down the country throwing their support behind the storyline.

Here are 10 facts about Dancing On Ice star Faye Brookes…

1. Faye is a true Mancunian

It’s apt that Faye landed a part in Manchester-based soap Corrie, because she was born and bred in the city! Faye Alicia Brookes came into the world on September 3, 1987 to parents Inger and Carl Barber.

She trained at the Guildford School of acting, where she graduated with a Bachelor of Arts degree in Musical Theatre in 2009. Faye has a younger brother called Jack.

Kate Connor first rocked up on the cobbles in October 2010, a few months after the arrival of her older brother, Aidan. She was close to her brother and their father, Johnny, following the death of her mother years earlier.

However, Kate’s relationship with Johnny was tested when she and Aidan discovered that he had cheated on their mother with Carla’s mum, Sharon – and he was Carla’s biological father. What a shocker! Eventually Kate accepted Carla as her sister, and the two became close.

The gorgeous thesp beat off stiff competition from EastEnders’ Tilly Keeper and Hollyoaks’ Duncan James to pick up the gong for Best Newcomer at 2017’s National Television Awards, her first official accolade for her role in Corrie.

“I really did not expect to get this!” she gushed, as she thanked her Corrie family for welcoming her to the cobbles. “I can’t believe I’m stood here, I was a little girl watching Coronation Street, and now I’m in it!” Aw!

4. She was engaged to former Pop Idol Gareth Gates

Faye and Gareth met back in 2012, when they were starring in a production of Legally Blonde together – she was playing lead character Elle Woods, and he was playing her boyfriend, Warner. The pair got together soon after.

Although the couple split briefly, they got engaged at the end of last year after Gareth popped the question during a romantic holiday in New York! Faye later revealed to Lorraine that Gareth had gone all out with his proposal, even asking her parents’ permission before he got down on one knee.

Sadly, it wasn’t to last and the pair parted before making it down the aisle.

5. Before Corrie, Faye was a star of musical theatre

As well as starring alongside Gareth in Legally Blonde, Faye has also taken the lead in productions of Shrek – in which she appeared as Princess Fiona – and Aladdin, where she played Princess Jasmine. She has also starred as Frenchy in Grease and Liesl in The Sound of Music.

Faye admits that her biggest ambition is to perform on Broadway, and her dream role would be in the musical Wicked.

Although she’s straight in real life, playing a lesbian character on screen has brought Faye a lot of attention from the gay community. And she’s happy that they’ve embraced her in such a big way.

“A few female fans have crushes, and that’s really flattering,” she told The Sun. “The gay community are so supportive, and I’m honoured to be flying the flag for them.”

7. Faye loves to run, and completed a 5k for charity

In 2017, Faye planned to run the London Marathon to raise money for cancer research, but had to pull out due to an injury. But she did complete the Macmillan Run that year in honour of her brother, Jack, who suffered from leukaemia when he was a child.

“Running clears my head,” she told Metro. “I try to stay fit and healthy, which comes from knowing you only get one life, so you need to take care of your body and feel good from the inside out.”

8. She was just as gutted over Rana’s death as the fans

Kate and Rana have proved to be one of the most popular pairings in Corrie history, and fans were devastated when Rana died in the Underworld roof collapse recently. And they weren’t the only ones – Faye reckons she felt like co-star Bhavna Limbachia, who plays Rana, was breaking up with her when she decided to leave the soap!

Faye also revealed that she cried so much during Rana’s death scenes that she was left exhausted. “At one point I was actually retching, I was crying so much,” she told The Daily Star.

9.  Faye runs her own acting school

Talented Faye doesn’t just star in Corrie – Faye and Gareth also run their own performing arts school for young people. The Fates Academy teaches drama, dancing and singing to kids aged four to 16, and is based at Media City in Salford, near where Corrie is filmed.

Both Faye and Gareth regularly pop in to teach classes alongside other acting coaches, including Faye’s former Corrie co-star Melissa Johns, who played Kate’s ex-girlfriend, Imogen.

10. Holly Willoughby’s sister was due to marry her…

“We asked her if she would get ordained and marry us, and she said yes!” Faye told the mag. Kelly worked as Gareth’s PA for six years, and the pair have been best pals ever since.

Kelly was in attendance at the couple’s engagement party in January, during which Gareth performed a 17-minute song he wrote to propose to Faye. Sadly she didn’t get to do the deed!

Who’s your favourite Dancing On Ice star? Leave us a comment on our Facebook page @EntertainmentDailyFix and let us know what you think!