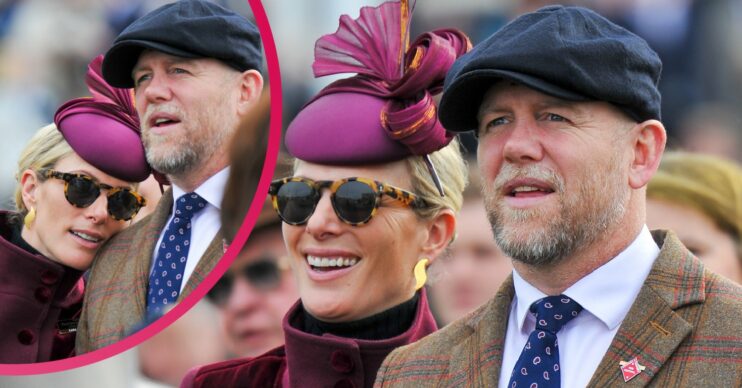 The married couple looked completely smitten at the event

Zara and Mike Tindall enjoyed a day out at the Cheltenham Racecourse on Tuesday (March 15).

The horse event kicked off yesterday, with the couple being the first of the Royal Family to watch day one unfold.

But what does Zara and Mike‘s affectionate display really say about the couple?

Zara and Mike Tindall ‘so at home’ during Cheltenham appearance

Speaking on behalf of Betfair Casino, Darren revealed: “You’ll notice in photographs of Zara and her husband Mike Tindall together that both have their bodies at right angles, turned in towards each other.

“This demonstrates that the couple are unconsciously matching and mirroring each other’s body posture, signifying a deep trust and connection between them.

“The other interesting thing about this photo is that both Zara and Mike are looking directly into the camera. Very often royals and public figures shy away from this, but here the pair are genuinely happy to embrace the attention that comes with stepping out at Cheltenham.”

Meanwhile, Darren also commented on the “genuine” display between the couple.

“We also know that the emotions both Zara and Mike are displaying are genuine,” he continued.

‘Zara and her husband are very much in sync’

“Take Zara, her whole face is engaged, she maintains eye contact and there are visible lines around the upper eyes and cheeks – the kind that occur when someone is demonstrating genuine happiness in a certain situation.

“Zara and Mike’s feet position is also symmetrical. Often when people are uncomfortable and want to leave a situation, their feet will betray what the rest of their body language is saying.”

The expert went on: “If a person’s feet are pointing away in a different direction, it signifies the direction they want to leave in. This, however, is not the case for Zara and Mike and they are very much in sync.”

And it appears Zara’s subtle PDA of leaning on her husband also has a lot to say about their relationship.

Darren explained: “Another sweet moment shows Zara leaning into Mike’s shoulder while linking her arm in his.

“This again signifies emotional happiness and is testament to how at home they are with each other and their relationship.”

It comes after Mike documented their day out on Instagram yesterday (March 15).

The former rugby star shared a series of photos alongside his wife at the event, including one with Zara’s brother Peter Phillips.

Alongside the post, Mike penned: “Great first day @cheltenhamraces with @thegreenroomexperience England are up for the first time in a few days!!!!