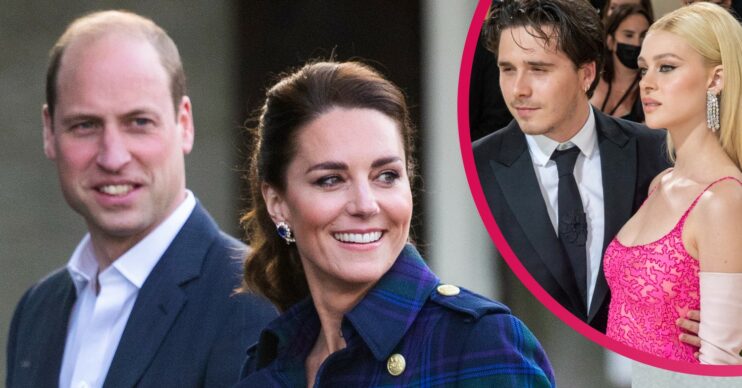 Beckhams went to BOTH royal weddings

William and Kate were invited to Brooklyn Beckham’s wedding but Meghan and Harry were not, a report claims.

The Mirror reckons the Duke and Duchess of Cambridge turned down the opportunity to attend the Beckham nuptials in Florida.

However, the tabloid claims Prince Harry and Meghan Markle weren’t afforded the chance to do similar as they weren’t reportedly invited at all.

And that’s because Brooklyn’s parents David and Victoria have a ‘long friendship’ with the Cambridges, the report claims.

According to the Mirror, William and Kate replied to the wedding invitations by saying they were unable to attend.

The Beckhams were among the guests to attend the duke and duchess’ own wedding ceremony in 2011.

However, David and Victoria were also wedding guests of the Sussexes when they married in 2018.

But it seems Meghan and Harry were not among those to receive an invite to see Posh and Becks’ eldest wed billionaire heiress Nicola Peltz.

Why weren’t Meghan and Harry invited?

The report claims the Beckhams “agonised” over which royal couple to have along for Brookyn‘s big day.

Apparently, that was due to the alleged rift between brothers William and Harry, rather than any concerns there may not be enough cake to go round.

Ultimately, they went with the Cambridges. But, in the end, William and Kate weren’t able to make it.

A source close to the Beckhams said: “David and Victoria wrote to William and Kate inviting them and the family to their son’s wedding, and William replied wishing them a great deal of joy but they are unable to attend.

The insider also reportedly reflected on how Brooklyn’s dad has “history” with William and Kate.

They’ve had a long history together.

“It was always about them, it was never about Meghan and Harry,” the source continued.

“They are the people David and Victoria are attached to and it’s always been about them because they’ve had a long history together.”

ED! has contacted reps for David and Victoria for comment.