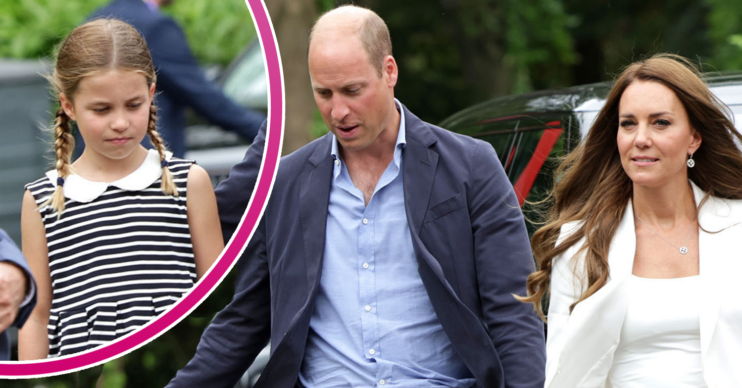 Princess Charlotte accompanied them on the outing

The trio met officials and the Commonwealth Games mascot and sat in the stands to watch the action.

However, while all eyes were on Princess Charlotte and her brilliant facial expressions, one expert focused on William and Kate.

And they claim to have spotted a “clear change” in their behaviour.

William and Kate at the Commonwealth Games

Darren Stanton watched the coverage of the royals’ appearance at the Games.

Speaking on behalf of Slingo, he thinks there’s a “clear change” in their “behaviour” at events.

The pressure eases slightly on William and Kate as they can blend more into the background amongst the crowds.

“If they’re attending as high-profile members of the royal family, such as a charity event or memorial service where they are going to be centre of attention, they’re demeanour changes compared to when they appear at events such as the Commonwealth Games.

“As spectators, the pressure eases slightly on William and Kate as they can blend more into the background amongst the crowds,” he added.

Duke and Duchess dress down

Darren then claimed this allows them to “relax” and also offers “an insight into what their personalities and relationship is like behind closed doors”.

He continued: “For instance, as they brought Charlotte to the Commonwealth Games, Will and Kate were happy to dress down a little.

“Will had his shirt sleeves rolled up, while Kate dressed more comfortably and neutrally.”

He added: “Of course eyes are still very much on her and William, but being a part of the crowd allows her to lean away from the spotlight, as she’s not officially on duty as such.

“It’s also at these type of events that the royal couple will often include their children.”

Royal fans were thrilled to see Charlotte at the Games.

One commented on social media: “It’s so good to see Princess Charlotte with her parents at The Commonwealth Games today!”

Another added: ““Absolutely wonderful to see The Cambridges. A dotting dad, a proud wife, and a charming daughter.”